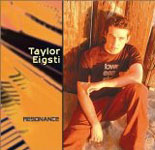 People who claim "jazz is dead," or that its only true practitioners are dying off, can be very tiresome. This CD also proves them, well, dead wrong. Taylor Eigsti (IKES-dee), just 19 years old, is eager to carry the torch into the next century and what's more, he's doing it. He opened for David Benoit at age 8, played with Dave Brubeck at 13, and joined the teaching staff of the Stanford Jazz Workshop at 15. Eigsti has already opened for Diana Krall, Natalie Cole, Al Jarreau, and Hank Jones. His trio has played widely in his native California, including the Monterey Jazz Festival (at the Ravinia Festival in Chicago, they played under the banner of "Rising Strars.").

Resonance , Eigsti's first truly wide release, showcases his incredible technique, enthusiasm and imagination. The lightning parallel runs on the blazing opener—Chick Corea's "Got a Match?"—would be dazzling in a pianist of any age. So would the impeccable, rousing stride piano on "Oleo," the sizzle on Ray Bryant's "Cubano Chant," and the assured swing on "Things Ain't What They Used To Be."

But this is no infant savant: Eigsti shows taste and feeling in his choices, knows how to build a solo, and is a gifted composer as well (for example, "Avolation" brings jazz squarely into the 21st century, while restoring its original mandate as "danceable music," and his tribute to his "Uncle Smith" is thoughtful and lovely). It's hard to pick highlights on this CD, where a reharmonized, 7/4 "Angel Eyes" gains mystery while chestnuts "Love Dance" and "Somewhere" get a new shine. Eigsti's favorite comrades (John Shifflett and Jason Lewis) are wonderful throughout; at the recording session, the trio created the sly, bluesy groove that became "Juliette."

I had the pleasure of meeting Eigsti on last year's S/S Maasdam jazz cruise, and it was refreshing to encounter a young pianist with more talent than attitude. Salutatorian of his high school class, he's a relaxed and engaging young man who is miraculously unspoiled. His career plans include introducing jazz to his own generation, which too often confuses the "smooth" with the real thing—if they think of it at all.

Since this record came out last month, Eigsti's been scheduled to tape an NPR "Piano Jazz" program with Marian McPartland. By all reports, Eigsti has grown a great deal since he recorded this CD. I can't wait to see him on this year's cruise and hear where he is now. Highly recommended.