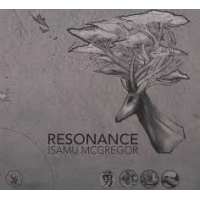 It has been five years since the release of pianist Isamu McGregor's debut Live at the Baked Potato! (Amorphous Paraphernalia Records, 2012) and his Resonance turns out to be well worth the wait. While the first album was solidly entrenched in the fusion arena, the current outing is a genre defying and eclectic collection with an emphasis on acoustics. McGregor, still in his twenties, has worked with some top talent including Chris Potter, pianist Jean-Michel Pilc and Stefon Harris. The members of his original quartet return here, but with varying degrees of involvement.

"The Dreamer" is an eclectic blend of styles; classicism meets funk and coexists nicely over the course of ten minutes. Tenor saxophonist Seamus Blake owns the searing and soulful "Relentless," a highlight of the album. The great Bennie Maupin makes a lasting impression with his guest solo on "The Drifter"; his bass clarinet adding a nomadic feel to the piece. "Thor vs. James Brown" brings back the fusion style with a heavy emphasis on Deen Anbar's electric guitar and some fine bass work from Evan Marien. Anbar was a significant factor in the debut but appears only on this one track of the new album. In large part, it is the aspect that skews the album further away from fusion.

Resonance demonstrates a growing expertise for this young artist. As a performer and composer, this new album shows maturity and a willingness to tackle some very diverse elements. McGregor has surrounded himself with a talented group of musicians, Blake, in particular, really standing out on his solos. Resonance is a major step forward in terms of McGregor's compositional development and an intriguing listen.

The Dreamer; Relentless; Halfway There; Because; The Drifter; Thor vs. James Brown; The Tao of Flying.