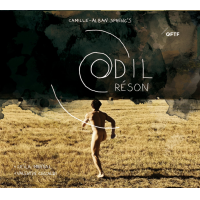 Though Camille-Alban Spreng has the chops and improvisational spirit of a jazz player, the band Odil's debut on Something (QFTF, 2016) established a wheelhouse also wide enough to include loose-form avant-garde and electric funk. This follow-up is billed entirely under the band's name instead of the leader's, which is appropriate given how well the unit has gelled in the time between. Sam Comerford steps up from guest to full member and the palette certainly benefits from a bigger dose of his frisky saxophones.

Where Something balanced itself between groovy and formless, this disc tilts more toward formless. The ears are first greeted with some vague not-quite-creepy crooning over a horn section drifting with the languid flow of warm syrup. It's almost as if Spreng is daring the listener to follow along—but follow to the next track and it's a hopscotching groove that makes staggering sound almost catchy. The rhythm keeps going even when the melody instruments drift off into the clouds, or when horns and voices break off into coordinated near-atonality in spots like the recurring "Peyotl."

Between Spreng and co-keyboardist Geoffrey Fiorese, the piano, organ and synth make a stimulating tonal jumble, keeping the melodies skewed even as the rhythm chugs steadily underneath. With the title track things go almost completely off the formless deep end, while "Aliocha" or "Pastelle Pastèque" turn up the simmering pace and the fun factor. Sooner or later there's usually something to bring the listener back to earth. Réson certainly requires some open ears, but makes for a stimulating affair, always mind-provoking and resolutely weird.