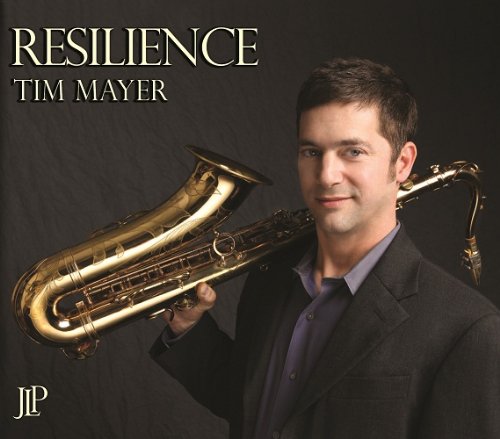 Resplendent arrangements and artful soloists are in abundance on Tim Mayer's Resilience. For this, the Boston-based tenor saxophonist's debut recording under his own name, Mayer manages to bridge the gap between the often opposing forces of stability and variety, as he builds each tune around the same core quartet while using an ever-changing list of guests as front line partners and featured soloists.

While the quartet functions as a stand-alone entity on a delicious ballad that seems to be built in the image of Ben Webster ("I Guess I'll Hang My Tears Out To Dry"), the ranks swell to varying degrees on every other performance. At its biggest, the group becomes a tentet for Sara Jacovino's woodwind-enhanced arrangement of trumpeter Charles Tolliver's "Emperor March," but the majority of the music is fashioned around different quintet and sextet lineups.

Trombonist Michael Dease is a frequent contributor who appears on seven tracks, and brings his fast-and-fluid chops to the foreground on his bop-influenced "For Miles," fellow trombone ace Steve Turre's "Fire And Ice," and a winning take of Bud Powell's "Dance Of The Infidels." Guitarist Mark Whitfield proves to be a marvelous match for Mayer on the saxophonist's lively "Who Knew?" and Thelonious Monk's "Work," and a talented triumvirate of trumpeters take turns tearing it up as they stand side-by-side with Mayer. Dominick Farinacci is featured on the snappy "Klimo," Claudio Roditi joins in on a waltzing "Blue Lace," and Greg Gisbert blends well within the aforementioned tentet, but comes on strong with bold and bright soloing during Kenny Dorham's rarely covered "Escapade."

Mayer often fashions his frontline in the manner of Art Blakey's Jazz Messengers which, with half of the pieces on the album having been written by former Messengers or Blakey associates, is clearly intentional; but this band is no knock-off. Thankfully, Mayer prefers allusion to direct imitation, which helps to make Resilience a resounding success.

For Miles; Escapade; Emperor March; I Guess I'll Hand My Tears Out To Dry; Fire & Ice; Dance Of The Infidels; Who Knew?; Blue Lace; Work; Klimo.