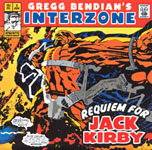 An impeccable tribute to an incomparable artist. Jack Kirby was one of the great comic-book creators, a dweller in places of long shadows and stark colors who fathered the Fantastic Four, Captain America, the X-Men and other legendary Marvel Comics. A musical tribute to a visual artist working in that medium might seem strange, but Interzone managed to pull off a coup. The music on Requiem is dead-on evocative of Kirby's grotesque otherworlds, and fascinating at that.

From the first vibe tinklings and needle-sharp guitar tones, Bendian and friends transport us into another dimension of sound. Spacy and ominous like a meeting of Sun Ra and Michael Mantler, they convey a full sense of the Fourth World's wonders. The first theme paces on little cat's feet, a film noir alley scene displaced into the cosmos. Nels Cline's guitar is blistering on "New Gods", celestially quacky over the deep ostinato of "Primordial Ink". The ethereal vibe of "Air Above Zenn-La" is disrupted by a New Orleans beat gone terribly awry and finally choked into submission. The compositions are avant-garde, unpredictable and completely gripping. While it's not likely that your local bar-and-grill jazz quartet will be covering any of these tunes in future sets, Bendian certainly knows how to bring a concept to fruition. Kirby would have been proud.