By BRUCE LINDSAY
November 13, 2015
Sign in to view read count 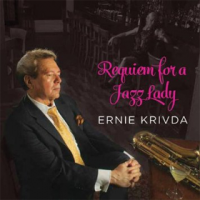 It's been over 40 years since tenor saxophonist Ernie Krivda first appeared on record. In a career going back six decades he's released around 30 albums under his own name and appeared on many more. His tenor sound, often plaintive, is distinctive and affecting. On Requiem For A Jazz Lady the tenor is given a quartet setting, an ideal format in which Krivda's instrument can shine.

The Jazz Lady of the album title is not, as one might expect, a legendary vocalist like Billie Holiday or Sarah Vaughan. It's actually 16-year-old High School student Beverley Jaroz, who was killed in Krivda's home town of Cleveland in 1964. Her murder was never solved and contact with her sister 50 years on re-kindled Krivda's memories of the event—he refers to Jaroz as "Cleveland's Black Dahlia." "Requiem For A Jazz Lady," which closes this album, is an atmospheric tribute to the teenager, played hauntingly by the band.

The album sleeve quotes Grego Applegate's assertion that Krivda's "tone sets him apart from other saxophonists." It's certainly true that Krivda has a very distinctive sound. Tough, strong, with what might be called an "extended vibrato," it might seem a little harsh to ears attuned to the softer tones of many tenor players. Krivda's tone is emotive and very personal—once those ears adjust they'll reveal a sound that's both distinctive and open, placing Krivda's heart unashamedly on his musical sleeve.

Requiem For A Jazz Lady brings Krivda together with long-term collaborators Marion Hayden on bass and Renell Gonsalves on drums. They're joined by pianist Lafayette Carthon , a relatively new partner for Krivda. This is definitely the leader's album, but his bandmates' talents give him the foundation for his creativity and when the opportunity arises each musician solos with verve. The funky "Questions," for example, gives Carthon and Hayden the chance to take two excellent solos.

There's just one cover tune here. Carthon opens Buddy Kaye and Billy Reid's "I'll Close My Eyes" with an Art Tatum-esque flourish before the tempo settles down to a slow and gentle pace befitting this lovely ballad. It's mostly a showcase for the leader's controlled, measured, playing but Carthon's solo is beautifully judged. Krivda's own compositions take in the blues (the slinky "Great Lakes Gumbo"), a romantic waltz ("Little Face") and the swing of "The Remarkable Mr Black." "Emerald" is a straight-ahead tune notable for relaxed playing, a lovely melody and a fine ensemble performance—it's probably the most impressive tune on what is in its entirety an impressive work.