Rene Marie With Experiment In Truth At The Jazz Corner 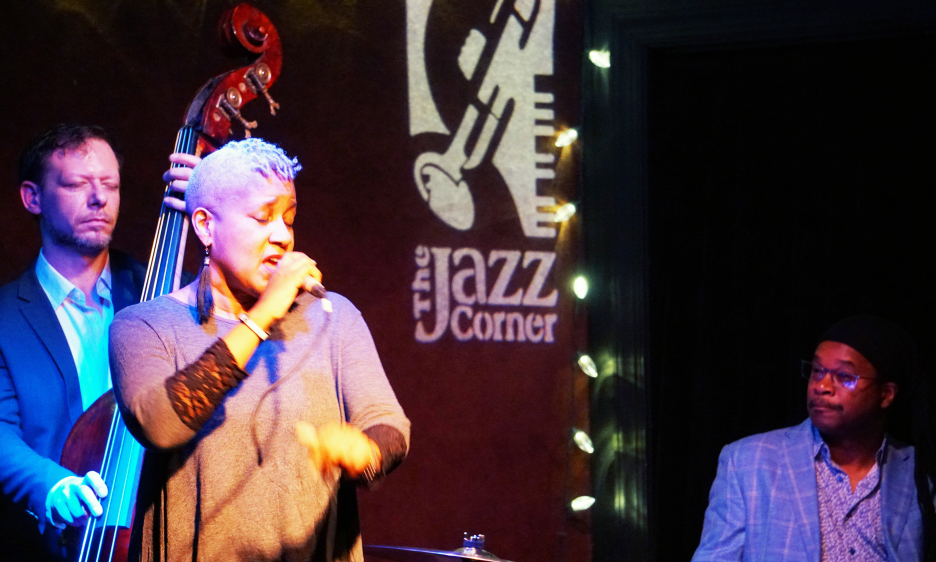 There are no sharp edges to Rene Marie's voice. Her singing has a warm, soft-velvet quality. She does, however, have an extensive range and an ability to change direction and tempo with surprising ease and speed. She was joined by Experiment in Truth, a trio comprised of John Chin on piano, Elias Bailey on bass and Quentin Baxter on percussion. They opened with the ever delightfully poignant Charlie Chaplin tune "Smile."

Grammy nominee Marie moves with sinuous energy performing her music, much of which is her own original material. Her lyrics explore tough issues informed by a difficult life. For more than two decades, she lived in a restrictive religious world before blossoming into singing in her middle years. With dramatic hand gestures and smiles she conveyed her joyous nature, but there is also a steely hand in her gentle glove. In "Stronger Than You Think," a composition sparked by an overheard conversation between two veterans comparing scars, she delved into the battle scars of life with the descriptive line "Broken wings, let me hold you close and calm your beating." Bailey began the tune with an introduction clearly defined on bass, Baxter joined in with his wood rimmed kit and timpani mallets, giving the perfect softness of sound and emphasis.

Marie did an almost perfect imitation of Eartha Kitt. Her delivery was every bit as sassy as the original in Cole Porter's "My Heart belongs to Daddy." Kitt caused a national scandal in England with that same song by wearing a backless evening gown on television. It was black and white television, so the scandal was all a while ago now. Bailey played a superb solo in arco during the tune, capturing the sensual theme by sliding long drawn out notes from the bass.

Scat singing is part of Marie's repertoire but her interpretations are more sound painting, peppered with pseudo-African clicks, stutters, cooing, panting and squeaks, all surrounded by melodic charm. She explained another original composition "If You Were Mine," as inspired by equal parts imagination and lust. The audience chose the running order of the set list by shouting out a number corresponding to one of the tunes. This lucky dip kept the set moving through to the final fast version of the 1930 tune "Them There Eyes" recorded by both Ella Fitzgerald and Billie Holiday in their time.

When Marie played the Johannesburg Jazz Festival, she wrote a song inspired by the festival title, "Joy of Jazz." A vibrant samba dance rhythm had the room moving around as Chin slipped a few measures of the Sonny Rollins classic "St. Thomas" into his piano solo. Inspired by Quentin Baxter, Marie wrote "Rimshot" and they all had great fun as shots were fired. Baxter delivered a complicated solo wrapping unexpected rimshots into the piece. They played out with an upbeat version of "God Bless the Child" which Billie Holiday both wrote with Arthur Jr. Herzog in 1939, and made famous with the later recording, forever associated with her name.

On his last visit to The Jazz Corner, John Chin presented the music of pianist, singer and social commentator Mose Allison in his project "Anything Mose." Chin played the same piano as Allison had used for the very last performance of his career to an audience which included the surviving members of the Allison family.

Leaving the stage after a charming blues encore, the rhythm section congratulated each other on keeping up with Marie. Both Quentin Baxter and Elias Bailey are top level touring and recording artists. When their names appear on any playbill or recording, it's a guarantee of excellence.

The weight of original material in the set list would strike fear into the hearts of many producers, but Marie took care to explain the inspiration and story behind each piece. The audience also had faith in the venue, their trust was well placed. The sheer humanity of Rene Marie's stories, music and lyrics captured the complete attention of an appreciative and responsive audience.