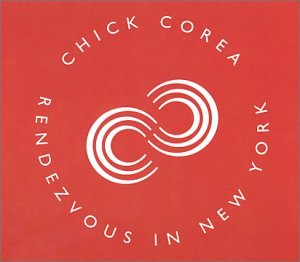 If there was one place in the jazz world to be in December 2001, it was at the Blue Note in New York, where in a three-week long celebration of his 60th birthday, pianist Chick Corea performed in multiple configurations with vocalist extraordinaire Bobby McFerrin, vibraphone legend Gary Burton, drummer Roy Haynes and many other world-class musicians. The extraordinary music that resulted was recorded on some 60 hours of tape, from which Mr. Corea chose 12 performances now released as Rendezvous in New York, a two-CD set. For those who were not at the Blue Note, take heart. This recording is not just the next best thing - it is Corea's distillation of the best of a series of very good performances.

As such, Rendevous in New York looks back at Chick Corea's career and marks the point of departure for his future endeavors. Historical context aside, the music here stands on its own formidable merits. The mood of the recording ranges from quiet and contemplative to fiery and energetic, and the album begins with a musical joke that I won't reveal here. Throughout, the joy, frank spirituality, and eloquence that have always graced Chick Corea's playing are front and center. It is pretty clear that Mr. Corea's collaborators viewed the opportunity to play with him as an extraordinary opportunity, and all are at or near their best. Of the 12 selections on this album, nine are standouts. Among other treats, there are contrasting takes of the classic "Concierto de Aranjuez/Spain," one with Bobby McFerrin and the other with Cuban born pianist Gonzalo Rubalcaba, very different in mood, both beautiful.

Those new to Chick Corea's music will find this album a very sound starting point for exploring his enormous discography. However, Rendezvous in New York, true to its name, does not contain a solo performance by Corea. As a complement to performances by this great artist in units from duos to sextets, an appropriate solo piece would have been a worthy addition. That said, because Mr. Corea brought out the best in his collaborators, the appeal of this recording goes well beyond piano jazz aficionados. Rendezvous in New York may have been Chick Corea's birthday party, but the gifts were for us.