By ROGER FARBEY
November 27, 2018
Sign in to view read count 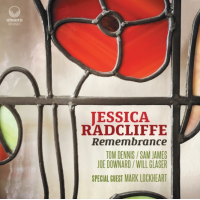 It seems propitiously timely to be releasing an album commemorating the centenary of the end of the first world war in November 2018 but vocalist and composer Jessica Radcliffe actually began her Remembrance project back in 2014, developing it as a component of her final year at Trinity Laban Conservatoire of Music And Dance where she graduated with First Class Honours in Jazz Voice. Later, the Remembrance Project received its premiere at the 2016 EFG London Jazz Festival.

It's obvious from the very start that this is an album of difference, when Radcliffe opens the title track by wordlessly singing "The Last Post." But it's the ensuing track "Dulce Et Decorum Est" which clinches it. She delivers Wilfred Owen's poignant poetry over an alternately pulsatingly rhythmic and looser score, speaking the lines rather than singing them, which is all the more effective. This technique, repeated in other numbers, is reminiscent of the poetry and jazz concerts of the 1960s instigated by poet Jeremy Robson and the late jazz pianist and composer, Michael Garrick.

Radcliffe again speaks her lyrics on "Mr Anonymous" but the words here are, at times, even more viscerally gory and shocking than Owen's, bringing home another perspective of the horrors of war, but the closing unison vocals in tandem with Tom Dennis's trumpet, leaven this paean to the dead. The simplistic sounding yet lyrically sombre nursery rhyme quality of "Little Boy Lost" contrasts with the longing heartache of "Jack-Jack" where Radcliffe's music combines with the words of a letter written by Amy Handley to Private John George Clinton (Jack). There are also some familiar tunes here such as Jerome Kern's "And When They Ask Us" (from Oh What A Lovely War!) and William Johnson Cory's "Eton Boating Song" which is sandwiched between some gloriously rumbustious bluesy piano vamps. In Remembrance, Radcliffe has produced an exceptional debut album combining beauty and pathos in equal measure.

Remembrance; Dulce Et Decorum Est; There’s A Long, Long, Trail; Mr Anonymous; Little Boy Lost; Jack-Jack; By A Bierside; I Would Rather Be A Rebel; Over The Top; And When They Ask Us.