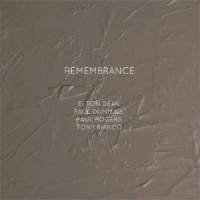 English saxophonist Elton Dean has inspired several memorials since his untimely demise in 2006. But there is always space for another when it is as vital as Remembrance, a two CD set from 2004 issued by the Lithuanian NoBusiness imprint. Best known for his seminal work with the jazz rock pioneers Soft Machine, Dean also amassed a substantial discography in the company of luminaries such as Keith Tippett,Kenny Wheeler, Roswell Rudd and Howard Riley. All the three other participants on this slice of unfettered, free jazz interaction collaborated with Dean repeatedly from the early 1990s onwards, explaining the easy going ambience and apparently effortless mesh of this expansive well recorded studio session. It is Dean's wiry alto saxophone along with Paul Dunmall's brawny tenor, which provides most of the narrative thrust here, accompanied by the hypnotic pulse laid down by bassist Paul Rogers and drummer Tony Bianco. Though titled presumably in Dean's honor, he features on only half of the 115-minute program, once in the full quartet, and once with the rhythm section, with the remainder comprising a trio with Dunmall and an outing for the rhythm team alone. Both reeds adopt a measured approach, taking their time to build up to what turn out to be fleeting crescendos, worrying phrases and turning them over to find what secrets they might reveal. At times Dean even recalls Ornette Coleman in the vocalized quality of his aching, occasionally lyrical, cries.

The 37-minute "Quartet" forms the center piece of the offering. In spite of long acquaintance, it begins with conversational probing between the horns, while Bianco roils from the off, abetted by Rogers' feverish heartbeat. The bassist's slashing arco drives Dunmall to a forceful, energetic excursion. Later Dean announces his entry with an electrifying wail which presages a climax of tremendous interplay. Bianco's multidirectional tattoo proves a near constant throughout, acting as a springboard which allows the reedmen to go wherever they choose, but even on the 28-minute duo cut, the energy levels remain high. It's a shame the permutation of just the two reeds together wasn't documented as well, as it is the blend of these two distinctive voices which gives the album its appeal.