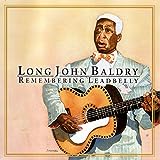 Baldry comes from the '60s British invasion of artists with a greater appreciation and influence of blues and roots music than many of America’s recording artists of the day. On Remembering Leadbelly he hits the ground running with the attack and spirit that so symbolized Leadbelly.

Baldry successfully bridges the gap between emulating a great artist and bringing his own voice to the recording. You will never feel like Baldry is either simply trying to imitate or replicate Leadbelly—and at the same time, there will be no feeling of an artist who doesn’t care about the source of his remembrance. This is most evident on Baldry’s takes on “Rock Island Line” and “Birminghamton Jail.” While understandable, it’s a bit disappointing that he didn’t choose to record “Goodnight Irene,” Leadbelly’s signature tune. Sometimes artists feel that signature tunes are best left alone; however, I feel that Baldry would have knocked it out of the park and recorded a version that would make Leadbelly smile.

Also, curiously included on this recording is an interview with Alan Lomax, who is credited with finding Leadbelly and you have more of a complete picture of the artist being paid homage to then your traditional tribute-type record.

Remembering Leadbelly will appease fans of great ‘traditional’ blues, as well as serve as a top-of-the-line modern day exploration of a legend and his music.