By DAN MCCLENAGHAN
April 18, 2019
Sign in to view read count 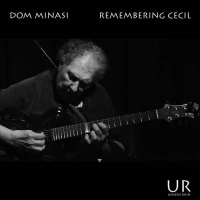 Guitarist Dom Minasi counts the late pianist Cecil Taylor (1929-2018) as one of his idols. Taylor was among the true pioneers of free jazz, with free-flying ensemble recordings like Unit Structures (Blue Note, 1966), Conquistador (Blue Note, 1967), and scores of solo piano outings, notably including Silent Tongues (Freedom, 1974), and For Olim (Soul Note, 1986). For many free jazz fans, it was the solo sets that showcased Taylor's true genius, so it is fitting that Minasi goes solo for his tribute to Taylor, with Remembering Cecil.

Not many pianists would attempt to take on Taylor in a head-to-head piano session; almost none would have the right stuff. Taylor's classical background combined with his wild-eyed, in-your-face freedom are unmatchable. A guitar taking on the spirit of Taylor seems even more far fetched, but Minasi does a marvelous job of it.

The album consists of four extended free improvisations, an approach akin to Taylor's often very extended solo piano workouts. Taylor's music was commonly described as atonal. It wasn't always. Not even most of the time. It was very often very percussive—Taylor played the piano at times as if he were trying to hammer it into the floor. Minasi, through a free-leaning player, presents a much smoother flow, with chord clusters and rapid-fire single notes coalescing into an odd and angular allure, a sound that is more overtly beautiful than what Taylor played—not that beauty wasn't there with Taylor, but sometimes multiple deep listening was required to fully appreciate it. Minsasi could probably play improvisations like this in a winery tasting room—where understated background grooves are usually heard—without getting tossed out of the place, though a segment of the audience (those not in the know; those without curious ears) might roll their eyes, might think him crazy. And he certainly would not fade into the background; he would command attention.

The spirit of Cecil Taylor, the headlong freedom, the chance-taking, the manic joy and live wire energy are all here. Dom Minasi does Cecil Taylor proud.