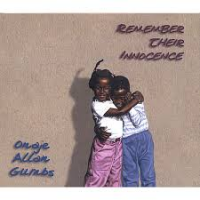 With a résumé that includes lengthy stints with singer Betty Carter, trumpeter Woody Shaw, and drummer Ronald Shannon Jackson, not to mention opportunities to support a variety of R&B and pop artists, pianist Onaje Allan Gumbs' diversity could be considered a double-edged sword. An advantage because he's worked in so many contexts that there's an undeniable verisimilitude to virtually any project he tackles. A disadvantage in that he runs the risk of losing his own voice amidst such a diversity of musical interests. Fortunately, when left to his own devices, he manages to retain a sense of self even as he draws from that breadth of styles.

While the focus of Remember Their Innocence is clearly in the jazz mainstream, there are hints from other sources. With its lush string pad and Lenny Argese's classical guitar, the title track might have something of a smooth jazz vibe, but there's an organic sense that keeps it from falling into that style's more programmatic nature. Similarly "All I Hear(Quiet Passion)" has an easygoing ambience and catchy bass figure—a hip-hop feel but somehow lighter—over which Sharrif Simmons' recitation is appropriately called spoken word instead of rap.

There are hints of Brazil on "Sol Brilho" and the slow bossa of "Virgo Rising," both featuring a tasteful and melodic Gregoire Maret, currently a member of the Pat Metheny Group and a harmonica player who seems to be showing up everywhere these days.

But for all the guests on the album—and there are many, including drummer Billy Kilson, saxophonists Roger Byam and Sadao Watanabe, and bassist Kenny Davis—and as much as the album is more about the music and less about instrumental showboating, Gumbs still comes through as the primary voice, with a selfless approach that is always in service of the song. Even on the solo piece "Playtime," where Gumbs demonstrates his roots in Art Tatum and Erroll Garner with a taste of Monk's obliqueness, there's no grandstanding, only interpretation.

"Innerchange," with its trumpet/tenor front line and George Gray's vibrantly swinging drumming working in tandem with Kenny Davis' walking bass line, hearkens back to vintage Art Blakey. "Healing Zone" is, at least at first, a more relaxed affair with a catchy two-chord vamp that sits in between the body of the tune, giving it an elegant tension-and-release, ultimately resolving in a characteristically powerful drum solo from Kilson. "Crystal Images" is an engaging jazz waltz with a Woody Shaw-esque trumpet solo from Eddie Allen, a name that should be more known.

Gumbs demonstrates the light touch, sensitive accompaniment, and lyrically intuitive soloing that have made him an in-demand player amongst a wealth of musicians. And yet he somehow manages to elude "household name" status. With albums as accessible and instantly appealing as Remember Their Innocence given the right amount of visibility, there's no reason why that shouldn't change.