By GLENN ASTARITA
May 17, 2011
Sign in to view read count
Track review of "Remember The Future" 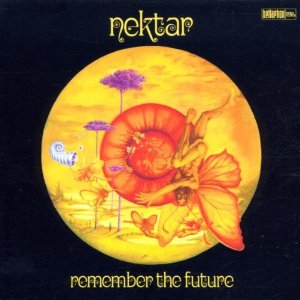 This deluxe/digitally remastered version of British progressive-rock band Nektar's iconic Remember the Future (1973) features a full second disc with a live performance of other works, culled from a 2007 concert in Brazil.

The original two-part recording of "Remember the Future," is followed by a live rendition, although no information is provided in the album notes, concerning the date or location. The album soared through the Billboard charts amid substantial global visibility and impressive sales.

"Remember the Future" is a near flawless progressive-rock extravaganza, entwined with gutsy guitar parts, firm pulses, and tuneful hooks that echo the psychedelic era. With Roye Albrighton's hard-rock crunch chords and airy vocals, the composition translucently merges ethereal virtues with pumping grooves and memorable choruses. In one segment, Albrighton injects phased guitar voicings—quite popular during the day—into a rock waltz, amid Ravel-like progressions and whispery themes. Spiced with spacey romanticism, the reissue offers an enticing trip down memory lane, while reemphasizing the creative spark that enveloped the rock world in the 1970's.