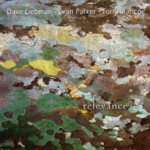 It is hard to imagine that these two saxophone titans, Dave Liebman and Evan Parker, had never met on stage before this 2008 concert at The Vortex in London. Both are innovators with a distinct, almost larger than life sound and they combine forces to make this meeting very special.

Back in the 1970s, Liebman was chosen by Miles Davis to help drive the trumpeter's sound on recordings like On The Corner (Columbia, 1972), Dark Magus (Columbia, 1974), and Get Up With It (Columbia, 1974). At the same time, Parker was fostering the European free music scene with Peter Brötzmann and Chris McGregor. Fast-forward some thirty plus years and both musicians have established solid careers and dedicated followers.

Putting the two saxophonists on stage together tempts an old fashion cutting contest or perhaps a last- man-standing show of endurance, however this is not the case. The energy of these two sets may be draining, but it's that good kind of tired.

Credit goes to Tony Bianco, the New York born drummer who has made a career playing free jazz in Europe. His unremitting pulse sustains this date throughout, playing with such ferocity that neither saxophonist has the opportunity or possibility to overshadow the other. It might be said that he steals the show.

The recording is broken down into two sets and four parts. The first three parts are barn burners, matching both Liebman and Parker on tenor saxophones, soprano saxophones, and a combination of both. Neither treads upon the other's territory, instead they opt to circle each other, encouraging a seemingly constant increase in animation. Spread between the right and left channel, the beauty of each player's sound is revealed. The last "Part 4," acts as the audience's re-entry with Liebman switching to flute and Parker maintaining his signature soprano sound. With Bianco on mallets, the ease of the trio's interaction allowing everyone to regain their real world senses.