By DOUG COLLETTE
April 8, 2017
Sign in to view read count 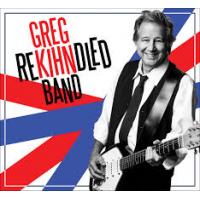 With just a glance at the cover of The Greg Kihn Band's first album in twenty years, Rekihndled, the band leader and namesake hardly looks like he's a day older in his de rigeur outfit of the eighties, white shirt with a vest and a carefully-loosened necktie.

But as evidenced with the gleeful stomp of "The Life I Got," it's much more important that Kihn's aged cheerfully (as well as gracefully) over the years. In part, because he and his quartet didn't really fit into any category of its time-New Wave, punk, metal or hair band-this record isn't so much a welcome return to form as a rediscovery of style, albeit (luckily) without a discernible attempt to rewrite their signature tunes/hits "Jeopardy" "The Breakup Song. " The GKB still sound like the bar band you always hope to chance upon.

As with the pun in the album title, the sing-song quality of numbers like"Big Pink Flamingos" and "Anthem" (the rhymes a bit too easy here) remain slightly predictable, but Kihn and company don't utilize repetition to a fault. Rather, they retain the innate sense of how to maximize the infectious quality of the all-self-composed material and keeping the tracks to modest lengths of two to four minutes helps too: such economy further maximizes the impact of this Beatlesque music.

Equally importantly, the quartet-now including Greg's son Ry on lead guitar (proving himself simultaneously tuneful and economical on "Good to be Me"), multi-instrumentalist/engineer and co-producer Robert Berry plus a trio of drummers (including original GKB member Larry Lynch along with Dave Lauer and Dave Danza) rocks with more than a little authority on "Cassandra." The vigor that comes through loud and clear on their pop-oriented tunes like "It's Never Too Late" transforms those tracks into effective change of pace: the sequencing of the album prevents the homogeneity that often afflicts a style like Kihn's that's clearly less-than-innovative.

Nevertheless, The Greg Kihn Band circa 2017 is as honest as it is earnest which only makes the music they make more refreshing. Only "Trained Monkey" betrays any self-consciousness whatsoever and while they strain for topical relevancy ever so slightly on "The Brain Police," the group otherwise puts on no airs. Instead, the recognizable tones of leader's own voice earmark the most notable tracks of the eleven, most especially the closer, "A Place We Could Meet; " in a wise move indicative of the experienced approach the participants instill in this whole record, this ode to friendship concludes with a bittersweet guitar figure, stating authoritatively that which words cannot.

While this record is no raging fire of rock and roll, it is well-nigh impossible to miss the warm glow it radiates. Those just learning of Greg Kihn's virtues will find that sensation seductive, while as long-term fans should find it reassuring. Rekihndled simultaneously does justice to the band's past and reaffirms a valid future.

The Life I Got; Big Pink Flamingos; Anthem; Cassandra; Tell Me Something Good; Good To Be Me; It’s Never Too Late; The Brain Police; Trained Monkey; I Wrote The Book; A Place We Could Meet.

About The Greg Kihn Band