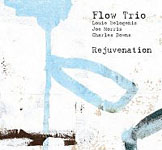 The tenor saxophone raises a lonesome voice heralding a new beginning. It evokes a melody that is shaped exquisitely by Louie Belogenis, who gives it a striking presence. But Belogenis is an innovator, and as he brings in subtle changes of pitch and direction, he adds an immediacy that is not easy to resist. His "Reflection" lays the path for what is to come.

Rejuvenation is the second recording venture for Belogenis, Joe Morris (bass) and Charles Downs (drums). Their first, The Flow (2004) was on Ayler Records. All are intensely creative musicians who have brought verve and surprise to the improvising music scene through the several groups that they have been part of. Their skillful navigation past the ordinary is in strong evidence once more.

Belogenis makes a strong impression, stamping his class with an array of phrases. The roar of his tenor is ferocious as it rips through angular, brassy phrases. But he also lends his voice to a gentle refrain letting the melody resonate and flow.

Morris, who has traded his guitar for the bass, and Downs are volcanic. The rumblings of the bass and the skittering of the drums push and edge the sax. Downs' sense of rhythmic pattern leads to a myriad of colors as he shifts accent and beat. Morris takes his vision to the bass in a whirling cycle of percolation driven by his use of doublets. His verve, however, takes a turn for a quieter, direct line on "Two Acts." He sets up a measured pulse at the head and then returns to the calm plateau, sandwiching the storm of squalls unleashed by Belogenis. The unpredictable switch in structure between tenor sax and bass is a delightful surprise.

"Succor" is one of the more appealing tunes. Belogenis creates a warm and inviting dynamic for the ballad and then turns the melody around without effacing its integral appeal. Morris' arco and Downs' steady beat enhance the character of the composition.

Interaction and empathy are the reference points in establishing mood and development. In building on this, Flow Trio prove to be a positive collective force.