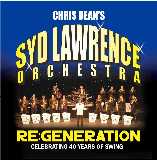 Great Britain has always had a fairly large number of active big bands but no more than a handful have stood the test of time, retaining their popularity and audience as musical tastes and listening habits evolved, or as some might argue, declined. For years, the Ted Heath Orchestra was far and away the country's gold standard when it came to big bands. Its contemporary and worthy heir to the throne is the Syd Lawrence Orchestra, now led by trombonist Chris Dean. It has been named Britain's most popular ensemble for nine years in a row by readers of the British-based magazine Big Bands International.

The SLO was formed in 1967 by trumpeter/arranger Lawrence who led the band for nearly three decades before stepping aside and handing the baton to Dean in 1996. Since then, Dean has recruited a number of talented young musicians who have not only kept the Lawrence legacy alive but amplified a tradition of excellence that has enabled to SLO to carry on a busy schedule as it continues to lead the annual big-band polls.

Trumpeter Russell Bennett is featured on "Evening Serenade, trombonist Jon Stokes on Colin Skinner's sly arrangement of "Baby Won't You Please Come Home, while Dean and fellow trombonist Ian Moffat share the honors on "When You Wish Upon a Star. There are splendid vocals along the way by Angie Mills on "It's a Most Unusual Day, Eleanor Keenan on "Maybe This Time, Dean himself on "Portrait of My Love and "As Long as I'm Singing, and the Serenaders (Dean, Mills, Moffat, Skinner) on the perky Glenn Miller evergreen, "Chattanooga Choo Choo.

Would that there were space to appraise the rest, as everything is delightful in its own way, especially the rhapsodic English folk medley. Suffice to say that the SLO more than validates its exemplary reputation. Kudos to the able soloists, the persuasive brass and reeds, and the sharp and vigilant rhythm section. If you're a fan of the Big Band Era and mourn its untimely passing, you're gonna love the SLO.