By Geannine Reid
December 4, 2016
Sign in to view read count 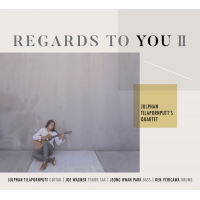 Tilapornputt's second CD with his new quartet, Regards to You II is his follow-up release from his trio's debut album, Inspired, released in 2012. Though you may not have heard of Tilapornputt previously, this guitarist has compiled a fine project that features nine original compositions by Tilapornputt. He explains further, "I have chosen 9 persons that have been influencing me, whether musically or non-musically, writing the songs surrounded by their personalities through my perspective. Each song cast totally different human personalities. We see the world through our unique perspective that we can neither remove nor resist. This album is the sound of my inner voice embellished by outer influences. The compositions are inspired by the idea that human personalities are partially described by the perspectives of each individual viewer. This creates multiple descriptions for a single person. In consequence, there is no untainted human personality." Joined by JoeWagner on tenor saxophone, Jeong Hwan Park on bass and Ken Ychicawa on drums, Regards to You II is a musical quest.

"Bricks" is the first selection, a fun driving composition that is full of intricate saxophone and guitar melodies and an excellent song form. Tilapornputt has a clear acoustic guitar sound, his articulation is outstanding with each note clearly ringing, even during fast passages. His has formidable technique, but develops a musical story first and foremost. Drummer Ychicawa and Tilapornputt have a very conversational relationship with one-another, which results in a highly musical and fulfilling opening track.

"Song for My Uncle" continues in the same vein, with a well-crafted melody and song form. Wagner turn in a fine solo with Tilapornputt playing lovely warm chords to add support, with light percussive figures that build the solo. Clearly this quartet is at home with Tilapornputt's jazz-influenced material, which features exciting melodies and tricky rhythmic patterns, that achieve a cohesive band sound, each piece is expertly executed. "Number 1" is a ballad that features Tilapornputt's pleasing chordal pulse and voicings, with a lovely chord progression emphasized by a gorgeous melody. Park's bass solo is uplifting and the sound achieved between his upper register playing and Tilapornputt's chords are decidedly enjoyable.

Tilaponputt has his own personal touch to his instrument and composing. "Galleria" is based on an intricate arpeggiated figure that is built into a pleasurable melody, which leads to Tilaponputt fingering a heartfelt solo with plenty of melodic motifs and chordal accents. "Milky Assembling" is an interesting composition built on an ostinato figure from Tilapornputt's guitar and Ychicawa's atmospheric drumming, coupled with Park coaxing a wide variety of sounds from his bass. Regards to You II just like the 9 individuals it portrays is a multi-faceted offering, with an enjoyable journey throughout. Tilarpornputt is a thoughtful writer and leads his ensemble through a program of well-versed ideas that suss out quite nicely.

Bricks; Song for My Uncle; Regards to you II; Up to the River; Milky Assembling; Resurrection; From the End of Tales; Galleria; Number 1.