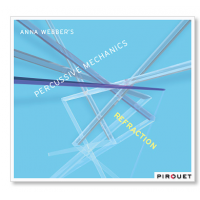 Credit the new generation of jazz musicians for neither following tradition, nor coloring within the lines. Their music is not created within "the tradition." Unless, of course, that tradition includes maverick innovators like Anthony Braxton, Roscoe Mitchell, and John Zorn, players that, at times, have been given the label of non-jazz. This new crop of players and perhaps, more importantly, composers, includes saxophonist Steve Lehman, drummer John Hollenbeck, pianist Pandelis Karayorgis, violinist Mat Maneri, and flutist/saxophonist Anna Webber.

Webber's music, at first glance, should be filed in the new music/classical section of your record store. But, since there are no more record stores these days, the divisions needn't apply. Refractions is the second release by her septet, and it follows the self-titled Percussive Mechanics (Pirouet, 2013). A second glance, and perhaps you should have been listening, and the music has momentum, maybe science fiction-like swing. She writes music for this talented septet to play precise notations, then, as if signaled, play off the page. Her jazz comes from the same perplexing origins that Louis Armstrong declared, when he first heard bebop, that the sound was "Chinese Music."

Her Percussive Mechanics sort through a machined precision, with the two-horn front of Webber and the clarinet/saxophone of James Wylie, the percussive skeleton of drummers Martin Kruemmling , Max Andrzejewski (who also doubles on the marimba), the vibraphone/marimba of Julius Heise, pianist Elias Stemeseder, and bassist Igor Spallati. The music is both punctilious and unfettered. Webber's compositions like "Climbing On Mirrors" buzz like a bustling hive of worker bees. At first glance, each player's mission is not decipherable, then the common goals reveal themselves. The motives of "The All Pro 3 Speed," which we are told was a ramshackle bicycle, are to slip a covert blues by you with its swing covered by a heavy tarp. Webber's flute traces lines for Wylie's saxophone to follow and the groove is cut very deep. "Tacos Wyoming" is an infectious melody laid out upon a complex turn-by-turn satellite map. Webber finds a contentment in complexity, so,like a math equation once understood, seems simple.