Christian Pincock: Reflections of the City 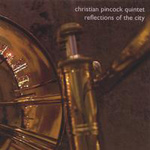 Tasty melodies, strong arrangements and capable blowing are the main assets of this 2004 recording by Christian Pincock's quintet. The trombonist leads a young but seasoned-sounding group with solid valve trombone work and a book of pleasant modern jazz tunes that range from gently crooning ballads to slow-boiling jams.

Pincock is known by many as a sonically wisecracking synth player in various improv settings, so it was a pleasant surprise to learn of his prowess in the traditional jazz arena. He blows a mean trombone, handling tricky melodic lines without a hitch and delivering sometimes fiery, liberated solos. There's only one cover—Monk's ubiquitous "'Round Midnight, arranged quite uniquely—though none are needed, as Pincock's compositions stand up just fine on their own. The music is mostly sedate and straight, but it goes out enough to stay interesting.

Hopefully this self-published disc is just the first of many to come from Pincock. He clearly shows all the signs of being a seeker of those elusive, ineffable things that keep some of us coming back again and again to that good old place we call jazz.

Farewells and Partings; The Learning Palace; Faceless Woman in Orange; Round About Midnight; Speed Racer; Reflections of the City; Eyes of the Enemy; Alone Among Millions; No Inherent Meaning.