Elisabeth Melander: Reflections Of A Voice 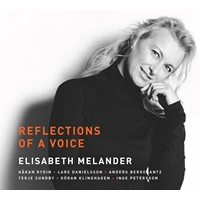 Elisabeth Melander was born in Boden, a military town in the cold and desolate north of Sweden. She used her vocal abilities and knowledge of music to escape and is now based in the southern cities of Lund and Malmö, travelling all over the Nordic Area, teaching, spreading the word about jazz and encouraging young musicians.

Every now and then she brings out an album. Reflections Of A Voice is her latest. It features jazz standards and three of her own compositions, the most interesting of these being "The Voice Inside."

Melander says the song is about "having the courage to listen to our inner voice and the voice of the heart, where truth is found." It could just as well describe the advice she gives to extract the best from her pupils. The song gets a little "stuck" melodically but her sincerity more than makes up for this and Anders Bergcrantz contributes a thoughtful trumpet solo.

Would that all of her compositions were as good. On "One Insight" she sounds like someone on the verge of a nervous breakdown and even Inge Petersson's tenor solo can't ease the pain.

Melander attempts a vocal version of Bill Evans' "Blue In Green," from the classic Miles Davis album Kind Of Blue. It wanders all over the place, with bizarre, ethereal "swallowed" lyrics. You never know, Evans might have approved—he had a soft spot for Swedish vocalists, most notably Monica Zetterlund, who put Swedish words to "Waltz For Debby" and invited him to Sweden so they could perform it together.

Melander produces a restrained, thoughtful version of another Evans staple, Jimmy Van Heusen's "Like Someone In Love." Bergcrantz delivers a fine solo but is even better in accompaniment.

It all gets a little academic on occasion, particularly on Alec Wilder's "Moon And Sand," which cries out for sensuality. Still, the song is a great survivor. It's amazing it recovered from its first, extremely stilted outing in 1941 with Xavier Cugat and his Waldorf-Astoria Orchestra.

Despite its flaws, this is an interesting album, demonstrating just how far from Boden Elisabeth Melander has come.

The Voice Inside; Blue In Green; Like Someone In Love; Moon And Sand; One Insight; A Song Of Joy; Inside A Silent Tear; A Foggy Day; Someone To Watch Over Me; You’re Everything; Vi (We); Dedication.