Jimmy Simmons and Friends: Red, White and You: Homecoming 2005 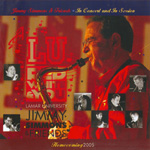 In case the name doesn't ring a bell, Jimmy Simmons is the president of Lamar University in Beaumont, Texas—a university president who doubles on saxophone, clarinet and piano! No kidding. His friends at this Homecoming 2005 concert (and studio recording) include the Lamar University Alumni Jazz Ensemble under director Wayne Dyess and a number of invited guests.

Simmons, whose gritty tenor saxophone is featured on Patrick Williams' "Her Song, is surprisingly good. In other words, he's one hip headmaster who isn't playing simply because he's the man in charge and can do so. Simmons and everyone else is given staunch support by the alumni ensemble, which should record an album of its own (if it hasn't already done so). Dyess doubles too, and his smooth trombone is front and center on "There Will Never Be Another You.

Other alumni in the spotlight include bluesy vocalists Sharon Montgomery ("Let the Good Times Roll, "I Got It Bad ), Becky Barksdale ("Muddy Water ) and John Calderon ("Stormy Monday, "Just for a Thrill ), alto saxophonist Jim Boone ("Autumn Leaves ), baritone Kurt Killion ("Don't Get Around Much Anymore ), trombonist Travis Harris ("Beautiful Love, "I'm Getting Sentimental ), pianist Charlie Prause ("All of Me ) and tenor Don Rollins (Tom Kubis' great arrangement of "When You're Smiling ). Drummer Billy McQueen, an LU music major, takes charge on the spirited finale, Cole Porter's "In the Still of the Night.

As near as I can reckon, seven of the thirteen selections were recorded in concert, the others in a studio. "Stormy Monday was most likely performed live, but it's hard to tell, as it fades before the ending. The tracks featuring Simmons, Boone, Dyess, Barksdale, Rollins and McQueen were definitely set down in a studio. Be that as it may, everything is well done, and the concert numbers are admirably recorded. Simmons has some remarkably talented friends, and together they know how to throw a delightful party.

Let the Good Times Roll; Her Song; Autumn Leaves; There Will Never Be Another You; I Got It Bad and That Ain