The Poma-Swank: Red Sky In Brooklyn

By BUDD KOPMAN
September 18, 2006
Sign in to view read count 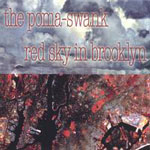 Red Sky In Brooklyn is one of the most enjoyable releases I have listened to in a long while. Combining superb musicianship with the ability to communicate directly to the listener, Kate Bell and company manage to simultaneously entertain and enlighten.

The Poma-Swank band was created by vocalist Kate Bell and guitarist Ethan Hein, and its by-word is "sassy jazz from Brooklyn." Bell oozes sass and does not hide her personality behind their voice—her instrument is not only her voice, but her total self, which she transparently presents via her singing. Every song, then, becomes somewhat of an autobiographical statement to some degree, and the person who is singing is someone you'd most definitely want to meet.

While singers naturally lead a band, or at least command attention via words, the rest of this band is far from a mere supporting cast. As presented on the record, Poma-Swank is a group whose members share the same musical aesthetic of having fun, swinging and telling a story, while locking into an irresistibly inviting vibe.

The rhythm section of Hein, bassist Chris Luard and drummer Jeremy Portwood is very tight and nimble as it lays down the different grooves found here. The brass section is comprised of trombonist Elizabeth Dotson-Westphalen (known only as Elizabeth! on the record) and trumpeter Jesse Selengut, who also contributes two originals ("Easy Song" and "Glass House Blues"). Clarinetist Adrian Mira and saxophonist Catherine Sikora (who is not mentioned on the web site) hold down the reeds. Together, through the arrangements, they fill out the sound, making the band seem bigger than it is.

Everyone, when given solo room, makes a statement. Dotson-Westphalen (who also contributes terrific backing vocals) shows she is in total control of the trombone on "Orlando's Bossa," on which Selengut and Mira also show their stuff. Sikora, who absolutely burns on "My Favorite Things," deserves special mention—not only for her work on that tune, where she gets inside of Coltrane's style, but anywhere she plays.

The most interesting and attractive thing about the members of Poma-Swank, though, is their attitude. The standards, "Sometimes I'm Happy" and "My Favorite Things," sound new without losing touch with their pedigree, while the band's originals, including four by Bell ("Orlando's Bossa," "In My Arms," "Red Sky In Brooklyn" and "Never Seen Me Before") have a familiarity about them that makes them feel like standards. They make you think you have heard them before, immediately drawing you in, only to reveal that they are finely crafted originals. Of the two covers, Björk's "Possibly Maybe" is the standout, maintaining full intensity for five minutes.