By DANIEL BARBIERO
April 11, 2018
Sign in to view read count 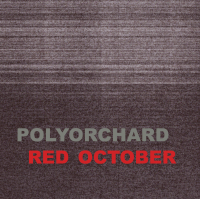 Polyorchard is a free improvisational group with a flexible membership; the one constant is Raleigh, North Carolina double bassist David Menestres. The group has taken the diverse forms of string trio, trio of strings and keyboard and mixed group of brass, reeds and strings. Earlier this month (I write at the end of March) they played the DC area alternative space Rhizome in a trio configuration of Menestres, keyboardist Jill Christensen and violist Dan Ruccia; in Red October, the group consists of Menestres along with trombonist Jeb Bishop, saxophonist Laurent Estoppey, and percussionist Shawn Galvin.

Red October was recorded in October, 2014 in Raleigh. Their previous release, Color Theory in Black and White, was recorded just prior to the sessions that produced Red October and was issued in 2015. This earlier release was divided in two: four performances of the Black group (Menestres with Ruccia and Chris Eubank on cello) followed by six performances of the White group (Menestres with Bishop and Estoppey). The two groups are different in sound profile but correlated in approach, each one playing effectively with the palette of instrumental colors available—colors derived not only from conventional playing, but from a generous use of extended technique and preparations as well.

As with Color Theory, so with Red October. The music is freely improvised with a great sensitivity to the instruments' timbral relationships, which disclose themselves through constant changes in the density of the group's textures. Throughout the recording, the four alternately come together as an integrated quartet or break apart into subgroups of different sizes, the better to emphasize timbral similarity or contrast as desired. Menestres, for example, can harmonize percussive strikes on the bass with Galvin's drumming, or he can blend his bowed lines into Bishop and Estoppey's long tones; the wind instruments often set up a dialogue that sounds like the same language being spoken in two related but distinct dialects. In addition, the quartet's play with variable dynamics, which range from very quiet to expressionistically strident, helps bring out and underscore the distinctive characteristics of each voice. This isn't purely sound-based improvisation, though; there are bracing moments of contrapuntal interplay and emergent harmonies that add nuance to the music's emotional drama.