By JOHN EPHLAND
September 26, 2014
Sign in to view read count 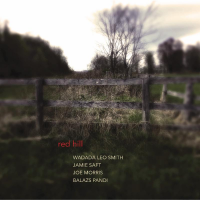 Red Hill is the collection of six group-composed pieces, led by trumpeter Wadada Leo Smith, this very fine aggregate also including keyboardist Jamie Saft, Joe Morris playing acoustic bass and drummer Balazs Pandi. Indeed, Red Hill can't be heard except as a portrait of four vivid musical personalities interacting across musical terrain loaded with many unexpected twists and turns, the playing thoroughly democratic even as it is a collective showcase of distinct musical personalities.

Take the opener, "Gneiss." What jumps out at you by tune's end is how Smith's tart, muted trumpet comes and goes, the loose and almost eerie musical configurations allowing for anyone step in. And that's just what Saft (Metallic Taste of Blood, Slobber Pup, Plymouth, The New Standard) does, his otherworldly keyboard work sprinkled with note choices that produce haunting as well as funky affects. Some of this may have to do with the recording itself, which allows for certain ambient, reverb-like possibilities. Morris (Plymouth, Slobber Pup, One) leads from the bottom up with plucky irregularity while Pandi's frantic soft-shoe brushwork becomes selective and reflective. The musical structures are open and cavernous, filled with potential landmines as the players deftly avoid stepping on each other's lines, no doubt due to some pretty deep listening. "Janus Face" offers more of the same, only now the music is laced with what is becoming Red Hill's slowly rising temperatures, Smith now fully in the game, blaring and bleating his harrowing and solemn lines over and through Morris' insistent arco lines when he's not double and triple timing himself on bass. Saft's electronics become a kind of tonic, the sustains a sonic sheen as they swerve in, through and around the other three's occasionally biting, scabrous tones, Smith's horn soaring when it isn't soulful or filled with rapid runs, all of it spread out over Morris and Pandi's unrelenting punctuations. By now, it's clear: this is one active rhythm section surrounding Smith. Dig Saft as he returns to the acoustic piano, shades of Cecil Taylor with Sunny Murray and Alan Silva swarming around your head like a crew of bees having just left the hive.

Totally improvised, there is all kinds of room on Red Hill for these so-called avant-garde artists to kick ass, let loose, upend the apple cart. There is that, but there's a lot more as well. The band's rambunctiousness that is now a hallmark is tempered by quietude here and there, as when we discover Smith playing something akin to a ballad, the group following suit on the oddly titled "Agpaitic," the piece's mood relatively subdued. It's a music filled with space and a kind of openness that allows the listener to once again get close, but in a different, almost tender way. Pandi (Obake, Metallic Taste of Blood, Slobber Pup, One) keeps the fires burning with his persistent rat-a-tat snare work, his jagged drum rolls suggesting a kind of wayward marching-band vibe with the plaintive slowly unfurling and ultimately grinding "Tragic Wisdom." More of that tartness in Smith's trumpet returns here as his signature parched tone weaves its way once again through Morris' steadfast ostinato lines, the music once again ultimately, organically finding a more gentle resting place towards end, Saft magically turning his piano into a harp.

With the reflective, gathering storms of "Debts Of Honor" and the closer "Arfvedsonite," it's as if, with Saft (revisiting Smith on record), Morris (longtime friend, first-time recording collaborator) and Pindi, this rhythm section couldn't wait to escort the now-trumpet legend off the proverbial cliff of gradually intense merrymaking. The clambake that is Red Hill leaves this listener with a head (and heart) full of sounds to be digested, like water overflowing a too-full funnel to be recaptured only upon repeated listenings. No spilt milk here.