The Red Bank Jazz Orchestra is a capable steward of old Hollywood's ballroom hits, but will surprise listeners with their modern treatments of moth-eaten themes &#151Craig Dowd 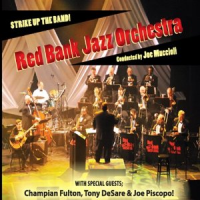 Strike Up The Band!

With the sheer number of ghost bands and regional orchestras currently active in America, many of which hold fast to the grave of sophisticated pre-war swing, the supply of tributes to our finest composers is never in jeopardy of being exhausted. But volume breeds vapidness, and most offerings to this province, with their prosaic interpretations and lack of emotional fluency, are found wanting. They aspire to such sweet thunder but give to the memory of Duke Ellington and Count Basie little more than a whisper of sweet flattery.

The Red Bank Jazz Orchestra's jaunty debut, Strike Up The Band!, is no such contribution. With its rich and accessible melodies, intriguing ensemble interplay and colorful guest vocalists (Champian Fulton, Tony DeSare, and Joe Piscopo), Strike Up The Band! exhibits all the pronounced gloss of a Jay Gatsby party yet, unlike Scott Fitzgerald's Jazz Age icon, the 17-piece band's wealth of style, precision and Rat Pack charisma is predicated upon veritable talent, eschews all melodrama and entertains without pretense.

Under the helm of conductor Joe Muccioli—best known for his reconstructions of Miles Davis' collaborations with Gil Evans—the Red Bank Jazz Orchestra is a capable steward of old Hollywood's ballroom hits, but will surprise listeners with their modern treatments of moth-eaten themes. Muccioli's band features some of Greater New York's preeminent working musicians—most notably trumpeter Bob Milikan, trombonist Wayne Goodman and multi-instrumentalist Bruce Williams, a fierce stylist on both the alto and soprano saxophone and veteran of the Lionel Hampton Orchestra—all of whom are adroit performers in a variety of genres.

Strike Up The Band! is largely composed of the usual medley of dramatic big band standards, sticking close to both their riff-based structure and narrative, but distinguishes itself from more conservative tributes in its daring, extroverted solo work, cinematic fluidity and refined presentation. The New Jersey ensemble's chief goal, here, is to stretch the canon while still affirming it, pushing their sound from the moonstruck opening credits of a Woody Allen film toward the progressive interaction of Lincoln Center's orchestra— which it achieves without any noticeable strain or mockery.

On Ellington's "The Mooche," the orchestra's Big Easy camaraderie is infectious and equitable: Goodman and Milikan groan, shout and moan in their respective plunger solos, offsetting the spare lyricism of Dan Block's clarinet skimming just above, and the reed section's famous Gothic motif punctuates their efforts with its slinking, eerie whine. Equally impressive is pianist Steve Ashe on "The Kid from Red Bank," the Neal Hefti-arranged showcase for Basie's rarely emphasized virtuosity. Ashe, whose touch here is tempered and noticeably lighter than Basie's already delicate tone, shines with his trills, subtle chords and dashing poetics, supervising the foreplay before finally submitting to the ascendant, pressure- cooker statement delivered from the explosive horns behind him, at last, like a final oath bellowed by an exultant James Cagney: Top of the world, Ma!

Fulton, a superlative vocalist and pianist, astounds on a boisterous version of Turner Layton's tune "After You've Gone," popularized by Al Jolson, Bessie Smith and Louis Armstrong. Flowing effortlessly over the song's whirlwind harmonic shifts, Fulton scats in a smooth, peppery style and pivots without interruption into lofty notes sustained like ardent pleas. Her voice radiates with the exuberance (and sorrow) of a young truant, a mischievous Matilda taunting her foe, yet somehow draws on the wisdom of a strong woman clutching her secret knowledge—it's her vivra sa vie. With the lyrics and melody weaving contradictory tales of heartbreak and liberty, the song requires a degree of vulnerability and toughness Fulton has in spades. I'm sad, she says, but one day you'll be worse, and coming from Fulton we believe it like gospel.

On Frank Loesser's "I Believe in You," DeSare gives a controlled performance attempted but seldom heard since Harry Connick, Jr.'s maiden recording. His smoky, optimistic vocals manage to lend even the most honeyed of Loesser's declarations a degree of respectability, color and nuance, leaving little wonder as to why he is widely considered one of America's most promising male entertainers. Loesser is the man all boys imagine themselves to be on prom night, only with a better voice.

Conversely, Piscopo's jarring rendition of "Come Fly with Me" is a case of returning to the well once too often. Sinatra impersonations in jazz are like Christopher Walken impersonations in Hollywood—everyone's got one. Despite being one of the world's foremost Sinatra mimics, Piscopo's performance, though fun and cleverly arranged, is too rife with obvious pretense to be taken seriously. The sophisticated hipster cool for which it aims and misses is nothing here but a tarnished facade and ultimately disrupts the flow of an otherwise seamless CD.

The remaining tracks are a testament to the orchestra's appreciation of the blues, and the rewarding task of balancing them with symphonic wit, group cohesion and technical dexterity.

"Moanin'" features pitch perfect dialogue, while Williams goes to church with some of the most expressive melodic variations found on the entire disc; the incessant chatter, breaks and funk-laden riffs on the Thad Jones composition "Us " laughs in the face of any tired charges of traditionalism potentially leveled against the orchestra; and most poignant of all is an instrumental version of Ruth Lowe's ballad "I'll Never Smile Again," in which the playing is truly elegant, reaffirming that big bands need not always be thunderous to be sweet.

It's true that swinging big bands are no longer the salve to tough economic times they once were, for society changed its ways and big bands only preserved them, but recordings like Strike Up The Band! certainly make a strong case for their reinstatement—not necessarily in the critical canon next to our most progressive artists, but in those all-too- frequent moments in our lives when we need to be carried away by waves of sound. When there's no refuge in life more comforting, or exhilarating, than the bandstand, and no music more touching than an old standard.