By DAN BILAWSKY
November 8, 2014
Sign in to view read count 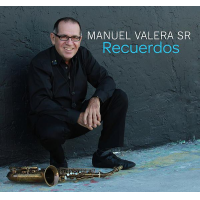 There's quite a bit of Cuban music history in Manuel Valera Sr.'s fingertips. Over the course of his career, he's put his saxophone to good use in the Orquesta Cubana de Musica Moderna, Mario Bauza's Afro Cuban Jazz Orchestra, Machito's Orchestra, Paquito D'Rivera's Big Band, and numerous other groups; he's played alongside bassist Israel "Cachao" Lopez, trumpeter Arturo Sandoval, and percussionist Carlos "Patato" Valdez; and he's even been cited as the creator of the first jazz saxophone quintet in Cuba. Now, with Recuerdos, Valera is taking to the spotlight, delivering a collection of ten jazz reworkings of boleros.

On Recuerdos, Valera touches on the work of eight Cuban composers, Mexico's Agustin Lara, and jazz's supreme royal figure—the great Duke Ellington. And regardless of whose work he's interpreting, he strikes a fine emotional and dynamic balance throughout, rarely falling prey to sentimentality and never acting out with needless aggression.

Valera possesses one of the most pure and open-throated soprano saxophone voices out there, completely avoiding the thin-and-nasal problems that plague so many who pick up the instrument, and his alto simply sings. His playing can be lyrical ("Si Me Comprendieras" and "Tres Palbras"), suave and sly ("La Rosa Roja"), and purely matter-of-fact ("Alma Con Alma"). He projects a sense of yearning when he's all by his lonesome for a spell ("Longina"), and he carries a hint of nostalgia with him during some of his travels ("Solamente Una Vez"), but this work isn't about the past; this music is in the here and now.

Valera's band mates—his son, pianist Manuel Valera, bassist Hans Glawischnig, drummer Ludwig Afonso, and percussionist Mauricio Herrera—help to bring a modern sensibility to this project without clouding the songs with too much latter day jazz jargon. The younger Valera has lots of room to solo here, the drum-percussion team makes a splash on occasion ("Longina"), and Glawischnig is rock solid in every respect, whether soloing ("La Tarde") or providing interactive support ("Cancion De Un Festival"), but this remains Manuel Valera Sr.'s show. He makes that clear when he's nonchalantly tossing off an endearing melody, soloing in relaxed yet confident fashion, and daydreaming his way through an Ellington-ian environment ("Solitude") in a duo setting with his son. Some marriages between old songs and new sounds come off as forced, but this one is as natural as can be.