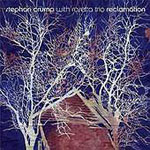 Vignettes in music are not all that uncommon—or unusual, for that matter. But when they are only partially written—or mostly suggested—by the composer, to be largely interpreted and improvised with singular flights of the imagination then they are not simply uncommon, but beautifully unique. Moreover, if the performers form a string trio where a myriad of perspectives collide, swinging madly as they careen in and out of a moving timeline, then they become more alluring. And finally, if the music tumbles down in virtuoso ways as it of explores that confluence of instrument, music, musician and ideas—as bassist, Stephan Crump's Rosetta Trio does on Reclamation—then a whole new cultural ethos begins to emerge; the music is, then, quite priceless.

In this trio, which Crump directs, the song melodies intertwine—twisting and turning as they do with magic and mystery. So vivid is the dancing rotunda, sometimes, that it sounds as if a three-way counterpoint is developing, swathed in a blur of rhapsodic harmony. "Memphis," "Overreach" and "Here, Not Here" are fine exemplary pieces where such a seeming passacaglia develops to fine effect. If all of these tracks were taken as elements of the larger suite that they develop into, there is evidence of a theme emerging in each of the tracks; a folksy one. Melodies and countermelodies abound in "Overreach." The grim bass line of the triad of tunes, "Here, Not Here" invites the guitarists to collide, while a crescendo of rushing harmonics winds and unwinds—almost stopping the song midway—to introduce a muddle of melodies, but all this is resolved by a fine conclusion.

The set resumes gently in a cleverly designed shift to the center of the string trio's thesis: to recreate a mirror for the pastoral imagery that has spawned the music. The swaying and shuffling rhythm is kept alive by Crump then tossed around from guitar to guitar throughout what is left of the album. Up until this point the entire music is characterized by pizzicato playing by the bassist. But in "Escalateur" the low con arco moan of bow on strings introduces a wonderful and ponderous element and is reflected by the guitar as well, despite plucking its way through the harmony of the piece. With a sort of sotto voce opening that develops into a majestic arco blanket under the soft guitar, "Pernambuco" unfolds its gentle—and quite subtle as well—Brazilian rhythm, as it dances from chorus to chorus, with echoing electric guitar offset by triplets played as if with a damper to muffle them. This is where the trio shines in all manner of musicality: melodically, with graceful harmony and stout rhythm. The continuing theme of seasons unfolding as if on a canvas of sound continues with "Toward Fall."

The Rosetta Trio eschews conventional strings to such an extent that even the bass violin plays almost the whole set without arco. However, this makes the album more unusual and ultimately all the more unusual and alluring.