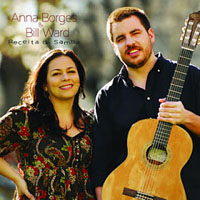 Both sing on alternate tracks that mix samba and bossa nova with other regional variations. A percussion heavy band that also includes flutist Amir Milstein and Ward (on piano and guitar) provides accompaniment to the vocalists.

Given that the five songs featuring Ward are associated with Joao Gilberto, comparisons to the Brazilian and his one-time wife Astrud Gilberto are inevitable. Borges' range is wider than Astrud Gilberto's, however, and her delivery less fragile and naïve sounding.

Ward puts a jazzier spin on the Gilberto tunes with his phrasing and cool yet earthy piano lines ("E Luxo So," and the slightly faster, more swinging "Preconceito" and "Brasil Pandeiro"). His vocal style is also more surefooted and less hesitant on the samba "Eu Sambo Mesmo," while his and duet with Millistein on "Falsa Bajana" is reminiscent of the original Stan Getz/Gilberto matchup, but with a simpler, more folksy approach.

Borges interprets a wider variety sub-genres associated with several different Brazilian artists. Her sensual vocals on "On Aquele Frevo Axe" and "Vatapa" are smoother than the versions by the famous Gal Costa, yet equally emotive. The arrangements also frame her voice with deferential instrumentals as Ward's keys mirror her intonations.

The lesser known gems in her repertoire include "O Vendedor De Caranquejo," featuring a flute and voice duet; Gilberto's "Curare" and Borges' take on "E Vamos A Luta," the polka-like forro from the northeast of the country, are taken at a more laidback pace than the originals by Gonzaguinha, the man credited with popularizing this particular dance. The heartbreakingly beautiful "Conselhos" is a brand new composition in honor of choro legend Waldir Azevedo, to whom great justice is done by Borges' delivery—a storm of emotion beneath a seemingly calm surface.

With this delightful album Borges and Ward share their love of Brazilian music, shedding light on new and obscure pieces and placing well known ones in a fresh perspective.