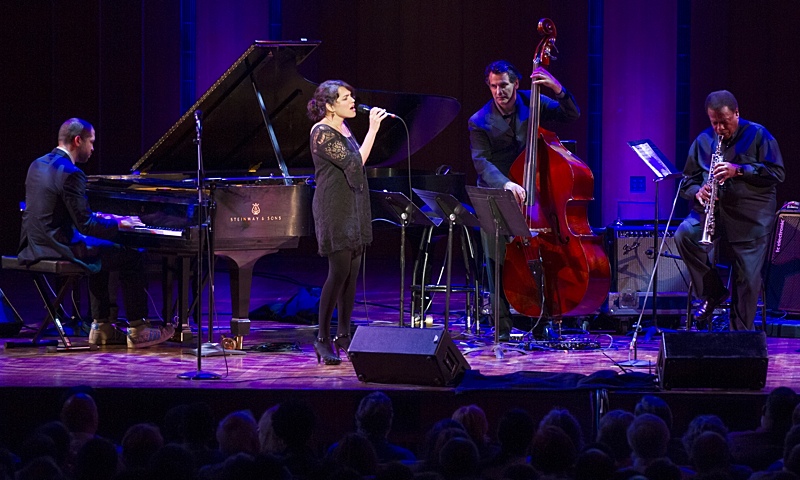 Jazz has always been socially conscious music, these [players] were renegades. —Terence Blanchard

Blue Note Record's significance to modern music is as inarguable as its story is remarkable. Over its 75 year lifespan the label has recorded many of jazz's defining artists, its evolution tracing the trajectory of America's most significant musical form from its beginnings to its present day diverse manifestations.

It is therefore especially auspicious that the celebration of its 75th anniversary took place at the Kennedy Center just as the center welcomes experimentalist Jason Moran as its now long-term artistic director, fulfilling a commitment to the musical form begun by the groundbreaking Billy Taylor when he established a jazz program at the Center over two decades ago.

When the Kennedy Center initiated its jazz program few major arts centers had so thoroughly embraced jazz. The importance of this infiltration into the country's dedicated forum for performance art cannot be overstated. Jazz was now being regaled in the same halls as more traditionally lauded forms like Opera, classical, and dance. Yet, under Taylor's guidance, jazz was always presented as a living, breathing art form grounded equally in the concert hall as the club. In fact, the Kennedy Center took the innovative step of erecting a jazz club smack in the middle of the Center. The KC Club quickly established itself as a premier venue for cutting edge performance in a comfortable, relaxed setting. Under Moran's guidance, the Kennedy Center continues to balance casting a spotlight on jazz's history, educational outreach, and more than ever, avant-garde experimentation.

These three themes were evident during the entirety of the Blue Note celebration which emphasized the label's historical contributions while putting its current artists front and center. Over the course of the week a huge cast of performers spanning multiple jazz styles occupied every corner of the Kennedy Center, including its main stages, the free daily Millennium Stage, exhibit spaces, and the recently established Crossroads Club.

The celebration's musical series culminated in an extended concert that delivered an aural portrait of Blue Note jazz via multiple performances from some of jazz's most prominent artists. Live streamed by NPR, the music unfolded against a backdrop of Blue Note album covers presented in chronological order, with Moran and Blue Note president Don Was presiding. For the opening piece, Moran and Glasper performed a stellar piano duet of "Boogie Woogie Stomp," the first Blue Note recording. Their take heralded the ensuing night of music which deftly melded historical perspective with contemporary style as it marched from one memorable tune to another. Lou Donaldson and Dr. Lonnie Smith delved into the blues with "Blues Walk," "Whiskey Drinkin' Woman," and "Alligator Boogaloo." Smith's distinct organ sound, the band's low and slow swing, and Donaldon's humorous repartee crafted an inviting picture of sixties jazz's straight ahead roots. Joe Lovano regaled the audience with a combination of "Fort Worth/ I'm All for You," while National Endowment of the Arts Masters Bobby Hutcherson and McCoy Tyner performed a commanding series of selections ending with the dynamic "African Village." Dianne Reeves assumed the stage for renditions of "Dreams" and a dramatic Terence Blanchard arrangement of "Stormy Weather." Blanchard then led a standout performance of his textured "Wandering Wonder."

Amongst such a litany of memorable music, it would be unwise to sift for a single highpoint. However, an easy contender was the penultimate selection "I've Got to See You Again," by Norah Jones. For this sinisterly contoured ballad dedicated to a stripper Jones was supported by, as she put it, the best backup band of her career, Wayne Shorter, Moran, John Patitucci, and Brian Blade. Aided and abetted by Moran's minimalist blues backing, Patitucci's foreboding bass, and Shorter's sophic saxophone lines, Jones injected this darkly etched confessional with penetrating intricacy, evoking the repentant eroticism of a Lenard Cohen tune and the alienation of The Center of the World to lay bare the suffering of desire as only the best ballads can.

Fulfilling the arc of Blue Note's esteemed history, the concert then concluded with a medley by the Wayne Shorter Quarter which underscored Shorter's decades-long presence as seminal composer, performer, and inspirational force.

Music, however, was not the only element on display throughout the festival. A special emphasis was also placed on visual and digital arts in order to document the lasting impact Blue Note has had on jazz's cultural image, beginning with the defining photography of Francis Wolff. An exhibit of historic Blue Note album art was prominently displayed in the Center's main hall. Underscoring the Kennedy Center's dedication to open access and audience participation, an entire multimedia, interactive website "The Blue Note Experiment" was also launched depicting Blue Note's history via album art, photography, and videos.

Packed with information, the site also acted as a portal for the Artsedge-sponsored competition which challenged young artists to submit works in the Blue Note style. (Artsedge is the Kennedy Center's digital learning program.) Interestingly, the nineteen year old winner of the competition, Katie Klema, had had little exposure to the music before entering the contest, and yet was able to access Blue Note's distinctive aesthetic to capture the prize, including a trip to the Kennedy Center for the festival. Additional on and off-site events included panel discussions, lectures, and photography exhibits.

One of the most interesting of these non-musical events was the "Listening Party" hosted by Jason Moran, Don Was, and Terrance Blanchard. This informal event afforded audience members the opportunity to participate in an open discussion as the hosts presented, and then opined, on a selection of recordings from the Blue Note catalog.

Held in the Center's private Africa Room, the setting aided the success of the event. Adorned by traditional artwork donated by African nations in condolence for President Kennedy's assassination, participants and hosts alike were arrayed in two circles at the center of which sat a set of speakers like a ceremonial fire. Without pretension, the speakers proceeded to first play and then discuss the recordings. Gratifyingly, what emerged was not a typical theory discussion or history lesson. Certainly, Blanchard, Moran, and Was provided insightful technical and historical perspective on the material, including some humorous back stories, but much more interestingly their unscripted approach gifted the audience with an honest view of how these master musicians still revel in the music, moved by its potency.

In fact, a recurrent theme emerged as the artists engaged more and more openly with the other participants. Repeatedly the speakers, particularly Blanchard, referred to the music as "rebellious music" produced by individuals who were defying a "place where they were not heard." After listening to Shorter's "Free Fall," Blanchard summarized this sentiment, proclaiming that "jazz has always been socially conscious music, these [players] were renegades," both reflecting and shaping the cultural upheavals and fight for individual expression that marks much of jazz's development. Perhaps fittingly, the session closed with Cassandra Wilson's resurrection of the Robert Johnson blues "Come on In My Kitchen," a sublimation which unites contemporary jazz with this early blues paragon of countercultural mutiny.

Rebellion. Redefinition. Respect and reinvention. These essential elements of jazz's DNA permeated the Kennedy Center's Blue Note 75th Anniversary celebration, distilled in a way that underscored the unique manner in which jazz simultaneously holds in adulation its venerable history and the seminal figures who sculpted it, while remaining an ever volatile cauldron of experimentation. Blue Note has been an integral platform for the form's innovators to walk that tight rope and the most significant aspect of the 75th anniversary party was the unambiguous sign that the label intends to continue embracing that tradition.