By KARL ACKERMANN
August 12, 2017
Sign in to view read count 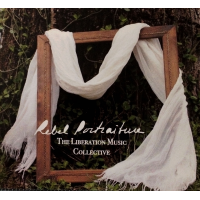 The Liberation Music Collective is a young group built around a pair of Indiana University graduates, bassist/vocalist Hannah Fidler and trumpeter Matt Riggen. As the name may imply, LMC liberally leans on the Charlie Haden/Carla Bley legacy of the Liberation Music Orchestra, even including a web site photograph that mimics the cover of LMO's self-titled debut. It's a high expectation bar to set for a group of twenty-somethings. The LMC, like their namesake, is a cause-based, large ensemble whose compositions are—as described in Kabir Sehgal's liner notes—"music to power." On their debut release, Siglo XXI (Astrum Records, 2015), the ensemble tackled a wide range of issues form income inequality to war, racial relations, feminism and more. Rebel Portraiture is more focused, the content is inspired by individuals who lost their lives in defense (or support) of a variety of issues.

The fifteen-piece ensemble has gone through a significant number of personnel changes since their debut; the current roster nicely balances the horn-heavy lineup with a talented rhythm section. Fidler and Riggen share the writing credits other than adapting the score from a traditional hymn. "Passing Away (For Giles Corey)" is an unusual piece written for the husband of an accused witch during the 1692 Salem Witch Trials. Gorey sacrificed his life as an act of rebellion and drew attention the hysteria of the Salem clergy, a frenzy that was rooted in nothing more than school-girl gossip and innuendo. A reenactment of Corey's death scene is on display at the Salem Witchcraft Museum in Massachusetts. "An Afterlife for Jeffery Miller" and "Kent State" share a common topic; Miller being one of four victims of the National Guard assault addressed on the latter composition. ..."Jeffery Miller" includes spoken word readings of the victim's poem, and a casual note left for a roommate at "Kent State." "An Afterlife for Berta Caceres" is dedicated to a Honduran environmentalist who was assassinated by that country's army. Instruments indigenous to West Africa lend an exotic flavor to the mid-section of an otherwise melancholy composition.

"An Afterlife for Ruqia Hassan" and "Iqra" are conjoined acknowledgments of Syrian and Iraqi journalists targeted by terrorist groups. The first of these two calls out a victim of ISIS, murdered in 2015 and the piece includes a reading from the Koran. "An Afterlife for the Unnamed" is a moving, full ensemble, acapella piece based on a traditional hymn and dedicated to anonymous victims. The closing number, "All I Need," is an anthem for tomorrow's insurgents and features excellent piano work from Ellie Pruneau and a strong vocal from Fidler.

In listening to Rebel Portraiture it becomes clear that LMC is not attempting to lay claim to the LMO birthright, but more to reiterate the spirit of involvement. There is a stylishness that is unique to this group and their narrative approach isn't indebted to any particular inspiration. Riggen and Fidler are fine composers and especially adept at taking weighty topics and crafting stories around them that are neither sermonizing nor frivolous. Social activism is a thorny space in music, especially in jazz where outrage and flourish can be difficult to distinguish from each other. It will be interesting to see where this group goes in the future and if they maintain their early vision throughout. Whatever that destination, this is an ensemble filled with talented musicians and Pruneau, trombonist Matt Waterman and guitarist Kyle Schardt are standouts. Rebel Portraiture should be an early breakout album for the Liberation Music Collective.

About The Liberation Music Collective