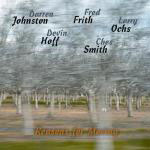 Darren Johnston (trumpet), Fred Frith (electric guitar), Devin Hoff (bass), Larry Ochs (tenor and sopranino saxophones) and Ches Smith (drums) stamp their class as improvisation and free jazz explode in aural splendor and imaginative propulsion on this collaboration. Each has established an undiluted reputation as a forward thinker in taking improvised music into new realms. Change for them is a constant challenge, one they meet on-the-go as they play with their own bands and with other musicians who answer to a similar calling.

Composition has a certain place in their vocabulary, but the larger attributes come when they work outside of the framework. Notation can be the bridge between improvised passages as much as it can herald the beginning or the end. Surprise is welcome, and adds to the impact, but the bigger bang comes from the interplay between the members.

Frith evokes memories of The Ventures and the flamboyance of Ennio Morricone as he brings in "Biocarbon Man. He quickly loses both in a welter of feedback and reverb as Ochs and Johnston cries in the wanton pleasure of blistering runs. The molten escarpment is churned by Smith, a veritable juggernaut of rhythm. The push and thrust is in full throttle as Frith, Ochs and Johnston converse. They are not without wit as they harken into the shadows and let a cloak of silence descend. That turns out to be a momentary diversion as they knock back into the heavy machinations of electric blister.

Dawn and the Flat Irons is another piece of high invention. Ochs indulges in the melody with Hoff keeping the pulse pliant. The mood is spare, but Hoff drops that as he ripples the strings and opens a run of triplets on the bass. This grabs attention, but Ochs and Johnston have something else up their collective horns. Their ensemble lines breathe classical music to bring in a lyrical glow.

Melody and composition course through the head of "Reasons for Moving. The pace is frantic, and the quintet is tightly knit. Johnston moves from the rest to mark new territory and Ochs follows on the tenor. But the rest won't stay away and they come back in a surge of momentum, giving the melody a discernible presence, but letting spontaneity be the hallmark