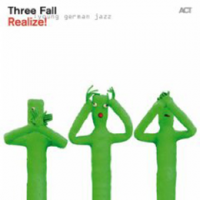 Sometimes it seems like every jazz ensemble with a hint of funk, or a desire to re-create a soulful New Orleans sound, has to be an octet or a nonet at the very least. After all, a full-scale horn section is a must, isn't it? Three Fall buck the trend—the clue is in the name. On Realize! the German trio of saxophonist Lutz Streun, trombonist Til Schneider and drummer Sebastian Winne creates a full, rich and groove-laden sound without recourse to bass, piano or trumpet section. There's plenty of recourse to electronic effects, though, which does much to fatten out the trio's acoustic instrumentation.

Most of the tunes are Three Fall originals, written by Streun or Schneider, taking their influence from a range of sources including funk, Afrobeat, reggae and rock. "Bata," a Schneider composition, gets its irresistible groove from a bass clarinet and trombone pairing that manages to combine mystery and good vibes in equal measure. "Endless" features Streun's tenor saxophone and the composer's trombone over reggae-style percussion from Winne—the electronic tweaks get a bit too heavy-handed on this tune, however, giving it a dated '80s feel (although the sudden repetition of a half-bar phrase, as if the needle's stuck in the groove, suggests that this might be both deliberate and tongue-in-cheek). Streun's short, witty, "Wusel" manages to mix in a spot of Charles Mingus.

There's also more than a hint of rock influences. Schneider's "Realize!" begins with a cheeky nod to the legendary rock riff from Deep Purple's "Smoke On The Water" so beloved of guitar store wannabees the world over. Three Fall also offers its own interpretations of three rock classics.

"The Scientist" features another bass clarinet and trombone partnership. It's pretty enough, but Coldplay's own version relies heavily on the vocal for its emotional impact and without it the song leaves little impression. The duo of "Killing In The Name" and Kurt Cobain's "Lithium" get rather fine interpretations. "Killing In The Name" features a great, rasping, tenor solo and an upbeat vibe that sits in stark contrast to Rage Against The Machine's much darker message. "Lithium" has a downbeat, pessimistic, beauty in keeping with Nirvana's original recording—a beauty which exceeds that of the Coldplay tune by some distance.