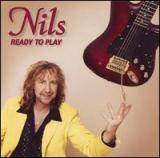 The two predominant instruments in the smooth jazz genre are alto saxophones and electric guitars. There's a lot of competition out there and if you're going to stand out from the crowd, you had better have something to say and say it in a way that while familiar, is still original.

By that yardstick Nils (just Nils) should enjoy a long and productive career. A former session musician for George Benson and The Temptations, Nils credits the prolific studio guitarist, Paul Jackson Jr., as one of his major influences. Similar in technique, but not slavishly imitative, Ready To Play, is a fine showcase for the German-born Nils taste for R&B, funk and jazz.

"Catnap" showcases a pretty wordless vocal by Clydene Jackson as Nils riffs along in a chilled-out, funky shuffle. Most of Ready To Play's 12 tracks should keep an adventuresome radio program director busy for months. Today it's "Midnight Breeze" and tomorrow it's "Sunrise on Sunset."

Nils tips his hat to his former employers, The Temptations with a pleasant interpretation of "My Girl" featuring backing vocals by Carmen Twillie and Terry Lynn Wood and an appearance on keyboards by former Earth, Wind and Fire member, Larry Dunn. Nils' ability to craft radio-friendly tunes along with well-chosen covers is a formula for future success. Happily, so far he's avoided the trap of recruiting hordes of guest artists and vocalists in search of a hit. The musicians accompanying Nils on Ready To Play compliment his playing and never overwhelm him.

There's more than a little bit of Paul Jackson Jr., in Nils' style of playing which makes it all the more ironic that Jackson's 1988 debut solo album was titled, I Came To Play. Fast forward almost 20 years later and Ready To Play serves notice that there's a new guitar slinger in town and his name is Nils.

Ready to Play; Just Smile; Catnap; Midnight Breeze; Sunrise on Sunset; You Gotta Be; Dreamin'; My Girl; Hi Five; Only You; Hurry Up and Wait; Last Night.