By CLIFFORD ALLEN
December 21, 2008
Sign in to view read count 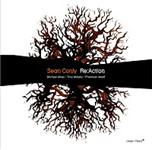 Bassist Sean Conly is an extraordinarily busy player, perhaps somewhat of a yeoman—he's worked with figures as diverse in approach as the violinists Sam Bardfeld and Regina Carter. But if he has a particular mettle, it might just be in the unruly, driving and highly plastic music of this ensemble. Conly, saxists Michael Attias and Tony Malaby and drummer Pheeroan akLaff take on on a program of ten originals and a cover of Eric Dolphy's "Gazzelloni."

There is something audacious about starting a set off with Dolphy's tribute to Italian classical flutist Severino Gazzelloni (from Out To Lunch, Blue Note, 1964), a tune that is rarely interpreted and even more rarely interpreted well. However, the quartet attacks it brilliantly, Attias' alto and Malaby's soprano tearing into the knotty, odd intervals with equal amounts of flame and reverence, Malaby's sputtering cycles implying a young Braxton as Attias' lines are a loose-stitched inner dialogue, evaporating and reforming as quickly as they begin. The pair is clearly a formidable match, ducking and diving in quizzical poles as Conly and akLaff set supple implications of time around and underneath.

But placing Dolphy's work at the head of an album does create some difficulty, too, as Conly's writing resides in a different area—the ruddy tango of "Daily Mutation" and its evolution towards multiple parallel lines and disassociative thrum, loose patter and brassy keen or the contrary motion of "Suburban Angst." The tart unison lines of "Ulterior Motives" are thrown asunder by a vamp that seems to heave itself in the line of fire at every turn. It's a subtler tug-of-war that drives the music, which leapfrogs multiple lines at once rather than scaling the crags of a Dolphy-esque flight pattern.

Certainly, bringing the explosive technique of Malaby and the quixotic, childlike patterns of Attias into the frontline act heavily on this record of contrasts, as does Conly's pliable meat and akLaff's brushstroke architecture. Their freedom can be delicate and meditative, or jarring, but one mustn't let the company Conly keeps on this date overshadow his composing, which is interesting and can only strengthen with time.