By GLENN ASTARITA
November 1, 1999
Sign in to view read count 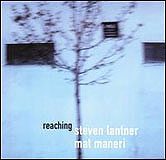 On Reaching violinist Mat Maneri and pianist Steven Lantner improvise through twelve pieces as they seemingly pursue two thousand ideas per track. Fragmented themes, microtonal passages, humor, pathos and intuitive interplay come to light as Maneri's notorious improvising skills while performing on electric violin work well with the equally adept and creative pianist Steven Lantner. Throughout, Maneri and Lantner maintain a fairly even-tempered flow yet move things vertically, horizontally and every which way imaginable. Maneri comps well with Lantner's brief thematic statements as they often run with ideas on the spur of the moment yet these pieces are remarkably cohesive and contain quite a bit of substance or meat! Fascinating improvisation and lots of depth by two musicians who obviously share the same ambitions. The duo perform as if they were truly Reaching for something which perhaps was previously unattainable. Imagery, poise and articulate renderings come to light as if these pieces were chronicles or events as told by two men speaking from within. Wondrous improvisation!

Reachin' and Grabbin'; In the River; Inside; Sway; Old Style; Magic; Moving; Planet o' Love; Waltzing; For You (For Me); Keeping it There; No Other.