Abbey Rader: Reach For The Skies

By MARK CORROTO
December 18, 2013
Sign in to view read count 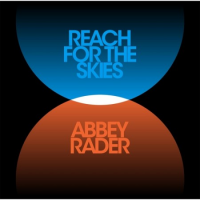 Look beyond the giants of free jazz saxophone, better yet listen to the sounds behind John Coltrane, Peter Brötzmann, Joe McPhee, and any other legend of free jazz. Listen and you'll hear Han, Elvin, Paal, Ronald Shannon, Hamid, Milford, Sunny, and Rashied. Drummers.

Abbey Rader is an unheralded legend of free jazz. He came up through the 1960s bop era only to be drawn into the New Thing of Coltrane, Albert Ayler, and Ornette Coleman. After a stint in Europe with Mal Waldron, he returned to the US and has quietly developed his craft, recording with Dave Liebman, Frank Lowe, Billy Bang, and Kidd Jordan.

Reach For The Skies is his second quartet recording and it follows Live At PAX (Abray Productions, 2011). Returning here are saxophonists John McMinn and Noah Brandmark and bassist Kyle Motl.

Sandwiched between two lengthy versions of the title track are some compelling examinations of the current state of creative music making. The disc opens with "Reach For The Skies I," which qualifies as Coltrane-inspired freedom. McMinn and Brandmark tangle and untangle tenor saxophones throughout. Parts I and II are free blowing pieces which draw on the energy of Rader's drumming. Another journeyman, Franklin Kiermyer's drumming comes to mind. Both players engage the horns with a nonviolent energy that builds synergism rather than schism. Rader is a perpetual animator building his pieces from blues song forms, in other words, the jazz tradition.

The extra bits here are a saxophone duet, "It's A New Day," a solo piece by bassist Motl "Kyle's Farewell," and a percussion/bass duet that closes the recording. Rader's freedom is not only expressed in fervent energy bursts, but in intimate and ultimately meditative moments here.