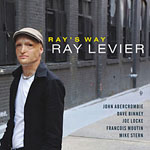 If drumming is the subatomic glue that holds a jazz performance together, then Ray Levier is the Einstein of jazz drumming. On his debut recording, Ray's Way, Levier provides a veritable masters class on the seamless and relative incorporation of drums into the melody of a song. Add to this that Idit Shner joins Levier in redefining the blues in jazz and Ray's Way becomes that much more provocative.

Levier bills himself as a freelance drummer in and around New York City. That is a bit like Galen calling himself "a simple country druggist" considering that Levier is joined on his debut by the likes of vibraphonist Joe Locke, saxophonist David Binney, bassist Francois Moutin and the bookended guitars of John Abercrombie and Mike Stern. Levier may be a freelance drummer, but he is no pedestrian freelance drummer.

The disc opens with the Locke title composition. This is the first of three blues that mark an expansion and evolution of the genre within jazz. Moutin opens the piece with a wicked bass figure that Levier fills in on his snare drum. Abercrombie turns on the dirty fuzz and spars with Binney's tenor saxophone in the head. Abercrombie's solo sounds double-time with every other note removed.

Oscar Pettiford's "Blues in the Closet" and Stern's "Bait Tone Blues" further expand the genre's rhythmic language. Stern performs on both, and while Pettiford's contribution is almost a standard blowing session blues, Levier and Stern polish it to a 21st century shine. Ned Mann provides the walking bass that propels the swing. "Bait Tone Blues" is more in keeping with the pioneering spirit of the group, with Stern and Binney jousting through a complicated head before entering into a John Coltrane blues soloing space.

The disc standout is Levier's "Song for Nury." Abercrombie and Locke provide a most organic foundation for Binney and Levier to play their brand of churchy gospel in the vein of the Crusader's "Way Back Home" (replete with a Locke quote of "Put a Little Love in Your Heart"). Levier's band is unusual in the rhythm section being made up of a guitar-vibes core. This format adds a softness to an otherwise edgy outing, elevating it well above the horizon of common.