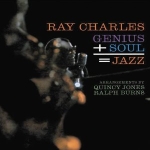 Ray Charles spent the 1950s and 1960s transforming the atomic American musics of gospel, the blues, R&B and country into what has been tagged "soul." Should jazz have been immune to his considerable charms? No, of course not. During the early 1960s, Charles was making his transition from Atlantic Records to ABC Records. This transition was surrounded by the releases of The Genius Sings The Blues (Atlantic, 1961), The Genius After Hours (Atlantic, 1961), The Genius Hits the Road (ABC, 1960) and Genius + Soul = Jazz (ABC, 1961). Here released in an expanded, 2-CD set, Genius + Soul = Jazz signaled that Charles was not merely interested in producing marketable pop music, but that he was also intent on expanding his, and as a result the public's, musical palette.

Concord Music Group and producer Nick Phillips have assembled the original Genius + Soul = Jazz and Charles' three Tangerine jazz albums into this 2-CD set. The odd-man-out on this release is "Misty," arranged by trombonist Steve Turre and originally released on the trombonist's The Spur Of The Moment (Telarc, 1999). This set bests Rhino's 1997 coupling of Genius + Soul = Jazz and My Kind of Jazz by two-thirds with the addition of the whole Jazz catalog. The insert retains the original liner notes written by Dick Katz and Quincy Jones, and new notes, dramatically expanded from the original, by Will Friedwald. Genius + Soul = Jazz is the opening salvo by the Concord Music Group of a series of reissues of the Charles' ABC material.

The original Genius + Soul = Jazz was recorded at Rudy Van Gelder Studios in Englewood Cliffs, NJ, late in 1960. The music had the unfiltered blues-riff sound of the 1940s Count Basie band with a little something extra. The Basie part is authentic—Charles employed the majority of the Count's contemporary band that included the likes of trumpeters Thad Jones and Joe Newman, tenor saxophonists Billy Mitchell and Frank Wess, guitarist Freddie Green and drummer Sonny Payne. The little something else might be Charles playing organ, predating Jimmy Smith's Verve big band outings of the mid-1960s. But there is something else, an indescribable something that tempers any genre with soul. That is Ray Charles.

The session was produced by Creed Taylor. The arrangers included longtime Charles associate Quincy Jones and Ralph Burns and were recorded over December 26-27, 1960. The LP was was originally released on ABC's newly minted imprint, Impulse!, the second release for the famous label (after trombonists' J.J. Johnson and Kai Winding's The Great Kai and J.J. (Impulse!, 1960). That Charles played the organ rather than his customary piano is no surprise as he was the master of a variety of instruments. His foray into the same instrumental arena as Jimmy Smith poses no meaningful comparisons because each artist represents a pinnacle in the same musical mountain range. Where Smith played with a funky, jazzy heart, Charles was 100-proof soul.

Charles sings on three songs—"I've Got News For You," "I'm Gonna Move To The Outskirts Of Town," and his little bit of fun with the band on The Clovers' "One Mint Julep." All are blues-inflected R&B with added big band momentum. The spirit of Basie exists throughout Genius but never at the expense of the leader, who spars brightly with Basie's band in creating this masterpiece. But where Basie liberally seasons Genius..., it is 100% Ray Charles producing the three Jazz recordings.

Charles' 1970s catalog is largely nondescript save for the three recordings of instrumental jazz making up his Tangerine jazz triptych. If a thread, other than the blues, passes through all of these recordings, it is that of drummer Art Blakey's Jazz Messengers. Over these four recordings are seven pieces associated with the Messengers or its members: Bobby Timmons' "Moanin'" and "This Here," Benny Golson's "I Remember Clifford" and "Ray Minor Ray," Horace Silver's "Sister Sadie" and "Senor Blues," and Lee Morgan's "Sidewinder." These pieces represent the best of the hard bop/soul jazz hinge. What Charles does is the same he did with the blues, gospel and R&B...he transforms the music into pure soul. Charles adjusts the governor of his band, producing a dense soul momentum that is as infectious as it is essential.

The Concord Music Group's re-issue of Genius + Soul = Jazz and the associated Tangerine releases represents the most complete reading of Ray Charles' legacy in jazz. That legacy is often discounted in favor of his earlier Atlantic sides, but few could swing as hard as Charles, as these sides allow. It will be with open ears that we might expect the future releases from the Ray Charles archives.