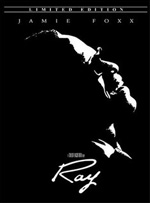 The film Ray was released in 2004, shortly after the death of its subject, Ray Charles. Directed by Taylor Hackford, the movie was a fifteen-year labor of love that hinged, according to Hackford, on Charles' instincts regarding the actor to play him. Hackford stated in an interview that "[Charles] had the best instincts of anybody I've ever met. Foxx emerged and the next year, the biopic won five Academy Awards, including a Best Actor nod to Jamie Foxx.

The last film I saw that was as comparable a vehicle for an individual performance was the adaptation of Manuel Puig's book Kiss of the Spider Woman (Hector Babenco, HB Filmes/Island Alive/Sugarloaf Films, 1985). In this film William Hurt plays the incarcerated homosexual pederast Luis Molina opposite the exquisite Raul Julia as the the revolutionary Valentin Arregui. The roll was powerfully and convincingly portrayed and provided Hurt his Academy Award Best Actor win. However, I felt the film fell short in measuring up to Hurt's superb role, but that is no slight as the film remains uniformly fine. The same summation is true for Ray. While both films are superb, they not sublime, as are the performances of their respective protagonist actors.

Ray reveals the physical, emotional and intellectual development of Charles from a young child losing his sight, brother (to drowning, a loss Charles blamed himself for) and mother tragically in rural Florida in the 1930s to his appearance and performance of Hoagie Carmichael's "Georgia on My Mind" on the floor of the Georgia Legislature as the governor declared the piece State song of Georgia, April 24, 1979. When leaving the viewing, I noted several people in the audience commenting that the movie effectively ended 25 years ago. At first blush, it is a long stretch to be sure, leaving out the almost 25 years between then and now. Assuming they were pedestrian music listeners their criticism is justified, but in defense of Charles, perspective is warranted.

Ray Charles changed the face of American music in almost as many ways as did Miles Davis over their respective long careers. Ray Charles is largely considered the originator of soul music, that bastard child of the blues, rock & roll, and gospel that upset about every Christian churchgoer in the late 1950s. That, of course, was before soul music became a household phrase with the birth of Motown and Tamala Records out of Detroit, Stax records out of Memphis and Atlantic Records Southern Summer home in Muscle Shoals, Alabama. Plainly said, there would be no Aretha Franklin, Otis Redding, Wilson Pickett, Percy Sledge, Diana Ross, Temptations, and many, many more had there been no Ray Charles.

In the film, the meat of the matter begins with the storied owner and producer of the then independent Atlantic Records Ahmet Ertegun (Curtis Armstrong) approaching Charles after Atlantic had bought Charles' contract from Swingtime Records. After several recording sessions, Ertegun confronts Charles lack of originality for sounding to much like R&B singer Charles Brown. Ertegun suggests that Charles try a stride piano piece in the style of the boogie-woogie arpeggio with words composed by Ertegun. That resulted in the release of "The Mess Around" in the mid-1950s and Charles' first continental shift in American music.

Still not adequately finding his voice, Charles stepped out on a limb and proved to be the most significant musical alchemist in American musical history. He took the erotic and violent themes of the Blues and mixed them with the Gospel Trinity of rhythm, abandon, and pathos, releasing "I Got A Woman" in 1955, creating his second continental shift in popular music. By this time the famed producer Jerry Wexler (Richard Schiff) was in the picture and "I Got A Woman" was quickly followed by "Drown in My Own Tears," "Hallelujah I Love Her So," and "The Right Time" all gospel-inspired melodies inseminated with carnal secular themes. These songs were the mortar of the foundation of soul music.

Wooed away to ABC records in the late 1950s, Ray Charles became the first artist to strike a deal where he owned his own recording masters, a practice unheard of before Charles demanded it in his deal. In the film, this leads to a tense meeting with Wexler and Ertegun where Chares offers them the chance to match ABC's umatchable deal. The former felt betrayed and the latter, proud of the accomplishments of Charles. While at ABC, Charles spun off another impressive string of hits that included, "Georgia on My Mind;" "Hit the Road, Jack;" and "Unchain My Heart."

In 1962, Charles took a major right turn, much to the chagrin of the ABC suits, and recorded the incredible Modern Sounds in Country and Western Music, his third continental American musical shift. And that is pretty well where the movie ends regarding Ray Charles' influence on American music. That Charles did not shake the ground again after his country music recordings is of no matter. He didn't have to; his legacy was secured.

In the film, the childhood scenes, flashbacks and similar devices are intended to (in a brief three hours) display the life circumstances that molded Charles with specific attention paid to his blindness and ultimate self-sufficiency, the death of his brother, his philandering, and his eighteen-year heroin addiction, all against the backdrop of the musical history he was continually rewriting. It adds the necessary drama and romanticism to appeal to the audience who hold that important. Foxx brings this all off as with no effort.

The most compelling settings in the movie deal with those scenes showing Charles installing the hinges of musical history, beginning with his improvement of Ahmet Ertegun's "The Mess Around. Next are the performances of "I Got a Woman and "Hallelujah I Love Her So. The true pinnacle scenes are where the singer is obligated with filling the final twenty minutes of a performance contract. Instructing his band to follow his lead, Charles turns to his Wurlitzer electric piano and begins to spin the gold thread of "What'd I Say. The second pinnacle was the "Georgia on My Mind recording session performed live with strings and choir. Foxx's performance is most soulful here. Modern Sounds in Country and Western Music supplies the remainder of the soundtrack, beginning with "I Can't Stop Loving You and ending with "Bye Bye Love.

Of course, there are other fine performances in the film. The aforementioned Curtis Armstrong as Ahmet Ertegun and Richard Schiff as Jerry Wexler, introduce two titans in American music, responsible for recording the likes of Charles, Aretha Franklin, Dusty Springfield, Solomon Burke, Wilson Pickett, and the soul list goes on. Bokeem Woodbine as David "Fathead Newman paints a convincing picture of the great saxophonist and Chris Thomas King swaggers as bluesman Lowell Fulson. Regina King played Charles' most compelling and sexy mistress Margie Hendricks, member of the original Raylettes and Sharon Warren who played well the long suffering wife of Charles, Aretha Robinson. Worthy of mention are the bit parts with Larenz Tate as a youthful Quincy Jones and Rick Gomez as the mythic Atlantic engineer Tom Dowd.

Visit Ray the Movie on the web.