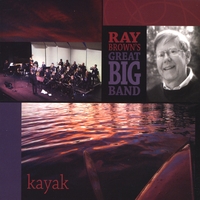 Sixteen years have passed since Ray Brown's Great Big Band (love that name!) recorded Impressions of Point Lobos, one of the stellar albums of 1994. Brown has ended that prolonged hiatus with Kayak, which should brighten many a listener's catalog of Top Ten albums for 2010-11. Whether the emphasis is on great or big, Brown's California-based band proves time and again that neither avenue is imprecise. The sound is big when it needs to be, the ensemble great—individually and collectively—on every chart (all of which are Brown's).

It's always a pleasure to reconnect with alto saxophonist Mary Fettig who solos tastefully on the first two numbers, Cole Porter's "So in Love" and Victor Herbert's "Indian Summer," the last with Ray Brown's guitar-playing brother, Steve (who co-arranged the tune). Steve Brown is front and center again on Kenny Wheeler's smooth-riding "Kayak" (a.k.a. "Body and Soul"), this time with the splendid young trumpeter Erik Jekobsen. Tenor Charlie McCarthy is showcased on the standard "I Fall in Love Too Easily," the trombone section (Dave Gregoric, John Gove, Dave Eshelman, Dave Martell, Derek James) on the great trombonist Frank Rosolino's jazz waltz, "Blue Daniel," which precedes bassist Sam Jones' radiant "Del Sasser" (solos by alto Paul Contos and pianist Eddie Mendenhall). Brown dedicated the Gershwin brothers' "Our Love Is Here to Stay" (played in three tempos—slow, medium, up) to his older brother Glenn who died in 2007. Darting among the shifting time signatures are Eshelman and tenor saxophonist Bennett Friedman.

Mendenhall commands the spotlight on Bill Evans' dreamy "Turn Out the Stars," Friedman on John Coltrane's bustling "Moment's Notice," Jekobsen on Sergio Mendes' ballad "Song of No Regrets," vocalist Gail Dobson on Frank Loesser's "I've Never Been in Love Before." The band rings down the curtain with Miles Davis / Victor Feldman's sprightly "Seven Steps to Heaven" (virile solos courtesy of McCarthy and trumpeter Don Beck). Drummer Dave Houghton drives the band to "Heaven" with finesse and assurance, as he does throughout the session. Steve Brown, Mendenhall and bassist John Shifflett round out the ensemble's formidable rhythm section.

Sailing aboard this Kayak is an invariably rewarding experience. Thanks to Ray Brown for shepherding the Great Big Band into a studio, but please don't make everyone wait another sixteen years before recording again. 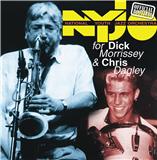 For Dick Morrissey and Chris Dagley

Sometimes even the most heartfelt tributes spring forth as much by chance as by design. Great Britain's superb National Youth Jazz Orchestra (NYJO), wishing to honor tenor saxophonist Dick Morrissey, who died of cancer at age 60 in 2000, received an unforeseen but no less welcome prize when moving its office this year (2010) from Victor Road, Harrow, to Vigo Street in London's West End. Among the hundreds of items turned up during the move was a recording of a live performance by NYJO with guest artist Morrissey taped at the Buxton Opera House in 1990. As if fate were working overtime, the drummer on that occasion happened to be Chris Dagley, a longtime NYJO stalwart who lost his life at age 38 in an early-hours motorcycle accident on July 28, 2010. Instantly, one memorial became two, and the album was lovingly dedicated to the lives and legacies of Morrissey and Dagley.

Even though the concert was preserved from the back of the hall on a Walkman recorder, and its provenance is clear in the sometimes boxy and less-than-burnished sound, the power and precision of NYJO come shining through on every number, as do the passion and energy of its irrepressible foreman, the 19-year-old Chris Dagley. As for Morrissey, he brings his special talent to the fore on seven of eleven numbers starting with Alan Hare's buoyant "Afterburner." Hare also wrote the groovy "Lift Off" and arranged the standard "Tangerine," each of which embodies one of Morrissey's no-nonsense manifestos, as do the late Harry South's turbulent "Storm Warning" and majestic "Royal Flush" (saxophones and rhythm only), Paul Higgs' succulent "Syrup of Phiggs" and Chris Smith's rapid-fire finale, "Going Dutch" (which fades during Morrissey's impassioned solo). Rounding out the concert are Smith's easygoing"Yessica" (showcasing a young Lisa Grahame on flute) and appetizing "Cheese & Carrots," Higgs' intense "Water Babies" and Mark Nightingale's clever renovation of a well-known Gershwin classic, "S'wonderfuel."

Mention should be made of NYJO's other soloists, as each of them is splendid. Tenors Howard McGill and Adam Talbot skirmish on "S'wonderfuel," while Morrissey spars with Talbot on "Going Dutch" and trombonists Dennis Rollins ("Lift Off") and Malcolm Earle Smith ("Storm Warning"). Rollins and flugel Martin Shaw are out front on "Water Babies," Shaw (trumpet), alto Scott Garland and guitarist James Longworth on "Cheese & Carrots." Paul Cooper's muted trumpet is heard with Grahame on "Yessica."

As the emphatic applause suggests, this is another electrifying concert by NYJO, one well worth revisiting even aside from its admirable purpose. Morrissey and Dagley are smashing, while the ensemble as a whole earnestly keeps pace. As if that weren't enough reason to consider the album, proceeds from its sale are earmarked for Dagley's partner, Jan, and their three children. For Dick and Chris is available from Stanza Records.

Soul of the Movement

Multi-talented Marcus Shelby is a man with a plan, and his plan on Soul of the Movement is to describe in musical terms the civil rights struggles of the 1950s and 1960s, and in particular the pivotal role in that ongoing series of events borne by the Rev. Dr. Martin Luther King Jr., as the album's subtitle, "Meditations on Dr. Martin Luther King Jr.," denotes. A didactic approach is nothing new to Shelby whose earlier albums have deftly chronicled the life of Underground Railroad heroine Harriet Tubman and revisited the infamous Port Chicago munitions explosion in 1944 that claimed the lives of more than 300 black sailors and injured more than 390 others..

As always, Shelby doesn't let a little thing like disparate genres impede his forward motion. On Soul, he draws together well-known hymns, classic spirituals, a civil rights anthem ("We Shall Overcome"), political broadside (Charles Mingus' "Fables of Faubus"), black pride treatise (Curtis Mayfield's "We Are a Winner") and five of his soul-stirring compositions to weave the tapestry of Dr. King's indomitable leadership of the movement from its tentative beginnings in the mid-1950s to his brutal assassination in Memphis in April 1968. Shelby's evocative themes converge on people ("Emmett Till"), places ("Birminghham," "Memphis") and events ("Trouble on the Bus") forever associated with the battle for civil rights in America. Besides his seventeen-member ensemble, Shelby enlists the services of a trio of blue-ribbon vocalists (Kenny Washington, Faye Carol, Jeannine Anderson) and guest saxophonist Howard Wiley to intensify the over-all impact, which they do quite nicely.

Washington, Carol and Anderson are heard, singly or together, on seven of the album's dozen selections (four of Shelby's compositions and "Fables of Faubus" are instrumentals). The ensemble boasts a number of engaging soloists, among whom the most frequently heard are tenors Evan Francis and Sheldon Brown, alto Gabe Eaton, trumpeters Mike Olmos and Darren Johnston. Howard Wiley fashions emphatic statements on soprano ("Memphis") and tenor ("Take My Hand Precious Lord"). Shelby, pianists Adam Shulman or Sista Kee, organist Matt Clark and drummer Jeff Marrs comprise a robust and tight-knit rhythm section.

As is true of almost any such far-reaching endeavor, there are moments of uncommon beauty and persuasive interest, others that are more prosaic. The cumulative effect, however, is momentous and invigorating. Once again, Shelby has pressed home his thesis and achieved his purpose, and has done so by entertaining rather than preaching. The result is a big band album that embodies a substantive message but can easily rest on its own merits.

As its debut album affirms, not only does the U.S. Naval Academy in Annapolis have a jazz ensemble, it has a very good one indeed. It helps greatly, of course, to have as proficient a sideman as Joe McCarthy, co-leader of the splendid Vince Norman / Joe McCarthy Big Band, sitting in on drums, and tenor saxophonist Luis Hernandez, a mainstay with the U.S. Navy Commodores, enhancing the reed section. Hernandez makes his presence known immediately, soloing adeptly on the opening numbers, Dan Cavanagh's "Split Rock" and Chris Potter's "Seven Eleven," and is heard later on Richie Beirach's Latinized ballad, "Leaving." Another guest, vibraphonist Dave Samuels, is showcased with pianist J.J. Wright on Samuels' lively composition, "Blue."

Besides those already mentioned, the band unravels the Cavanagh originals "Phase Space" and "Gozar," Pat Metheny / Lyle Mays' "First Circle," Jim McNeely's "Extra Credit" and Tadd Dameron's bop classic, "Hot House." Jessica Hatfield sings on two tracks, "Leaving" and Cole Porter's "Easy to Love." The ensemble is sharp throughout, and arguably at its collective best on such rhythmically precise and emphatic numbers as "Split Rock," "First Circle," "Blue," "Extra Credit" and "Hot House," even though the other themes are no less persuasive in their own way.

In sum, an auspicious and pleasing maiden voyage for the U,.S. Naval Academy Band, one that augurs well for cruises yet to come.

Gan Bei is the seventh album in as many years by director Susie Jones' self-assured Jazz Band from Mt. Hood Community College in Gresham, Oregon, which this time around shares blowing space with two smaller combos, Nos. 2138 and 2102 (no word anywhere as to the reasons for the numbers). Combo 2138 excels on the boppish opener, tenor saxophonist Leon Cotter's "Song for the Chairman," and on pianist Shawn Schlogel's rhythmic "Time Keeps Movin' On," while combo 2102 is in the pocket on guitarist Steve Lillegard's even-tempered "Make Me Feel So Blue" (sensuous vocal by Susan Sinclair).

As is the case with the combo numbers, the origin of Gan Bei is unexplained, but that's beside the point. What's important is that the MHCC Band (and combos) perform well throughout, producing yet another album of tasteful big band jazz that is well above the norm. If past performance is a credible signpost, 2011 should give rise to more of the same.

Tracks: So in Love; Indian Summer; Kayak; I Fall in Love Too Easily; Blue Daniel; Del Sasser; Our Love Is Here to Stay; I've Never Been in Love Before; Turn Out the Stars; Tricotism; Moment's Notice; Song of No Regrets; Seven Steps to Heaven.

For Dick Morrissey and Chris Dagley

Tracks: There Is a Balm in Gilead; Amen; Emmett Till; Black Cab; Fables of Faubus; We Shall Overcome; Trouble on the Bus; Birmingham; Go Tell It on the Mountain; We're a Winner; Memphis; Take My Hand Precious Lord.

Tracks: Song for the Chairman; Cherokee; Hullabaloo; Count Me In; Time Keeps Movin' On; Invitation; The "J" Bird Rides Again; Livin' Larger Than Life; Make Me Feel So Blue; Soupbone; What'd I Say.