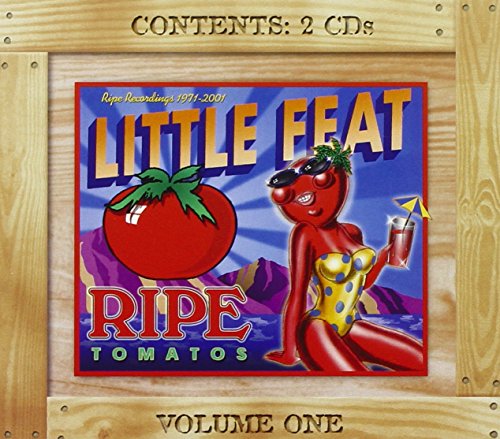 It Has Been a Good Century for Little Feat

Since the turn of the new century, record stores have been treated to a variety of previously unreleased live Little Feat. This music has taken the form of the quasi-bootleg Pilot release, Late Night Truck Stop , the newly rejuvenated Waiting for Columbus (in this humble critics mind, the greatest Rock Live Recording ever), and the Rhino Box Set Hotcakes and Outtakes . All of these collections sport previously unreleased live Little Feat when the band was still under the nominal control of its self-destructive genius, Lowell George. Now the band, or more specifically guitarist Paul Barrere and keyboardist Bill Payne have initiated Hot Tomato Records , a new label devoted to the assembly and release of previously unheard Little Feat performances from the band’s inception in 1971 through today. The results prove to be staggering.

In early June, Hot Tomato records released the first two collections in what will prove to be an important documentation of one of America’s finest bands. Both are 2-CD sets, Raw Tomatos, Volume 1 and Ripe Tomatos, Volume 1. The difference between the two is not very clear and Paul Barrere’s typically rambling liner notes for each disc (which are identical, save the song descriptions) shed little light on the titles and assemble of the discs. Each set has recordings from the four major lineups of the band:

These collections are no mixed bags. There are at least a dozen good metaphors that can be applied to these assemblies. The Scrapbook Metaphor works well because The source of the music are odds and ends tapes stored at keyboardist Bill Payne’s home and discovered during a recent move. Further, the collections are of aural snapshots over 30 years of band family life, a life that includes birth, death, divorce, and resurrection. The band’s history is replete with colorful "family" members surfacing here and there. Some of these sound-graphs have an analog black and white sound and others digital color. Each song presents itself like pages of photographs turning, liberating some pictures of family members that are a bit fuzzy and others crystal clear and, no matter what, all revealing. Examples here are post-George Band Three’s "Rock and Roll Doctor" on Raw. Plodding and powerful, the song builds steam through the short introduction to become a relentless locomotive that even in the absence of Lowell George is still permeated with his genius and sense of humor. On the flip side is George himself in a murky 1971 live recording of "The Fan" or a 1972 demo "Fat Man in The Bathtub," while cousin Bonnie Raitt (who’s slide guitar style owes all to Lowell George) shows up for a live 1973 duet on "Sailin’ Shoes." Embryonic and primal, this is the raw talent that would refine into 24-carat gold by the time of Waiting for Columbus.

A second useful metaphor this that of Musical Anthropology. These sets offer the Little Feat Fan ample chance to hear the development and evolution of the band over the last 30 years. Biblically speaking, if the Lowell George era were the Old Testament then what followed his death was the New. Central to any discussion about Little Feat is Lowell George. But it is unfair to this very fine assembly of musicians to assume that he was the be-all and end-all of the group. These collections support this also. "Shake Me Up" and "Business as Usual" from Raw or "The Ingenue," "Under the Radar," and "Vale of Tears" from Ripe reveal the smooth intelligence of the Barrere/Payne Feat. One has to dig backwards in order to go forward and these superb collections allow the listener to do exactly that.

The last metaphor is that of Dean Benedetti. In the two-year period of 1947 and 1948, amateur saxophonist and professional Charlie Parker Fan Benedetti recorded all of Bird’s solos when the great altoist performed at Los Angeles’s Hi-De-Ho Club in the company of Howard McGee, Hampton Hawes, Addison Farmer and Roy Porter. Parker had just been released from his six-month sabbatical in the Camarillo State Hospital and he was on fire. Unfortunately, Benedetti only recorded Bird’s solos, neglecting all else. This leaves the listener with a magnificent, yet headless torso. Raw and Ripe are replete with fragments and fadeouts and interesting snippets. They are assembled chronologically and finally offer a history of the band that parallels the band’s history, unpredictable, brilliant and incandescent. This critic looks forward to Volumes Two, Three, Four...