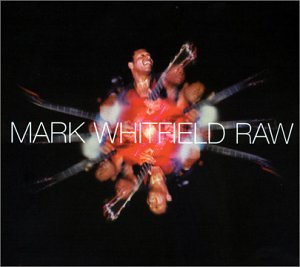 Mark Whitfield, aka "Quick Pick"(as known to fellow musicians) is often cited as being one of the strongest voices on guitar in the jazz mainstream today. His new album "Raw" on the Transparent label is firm testimony to this view and is a must-hear live album, not only for the guitar chops therein but for the bold conceptual statement that Whitfield and his working band propose here in concert

Many are familiar with Whitfield by his Verve records, some admittedly poppish but two of which were solid straight-ahead outings and well-received. In recent days Whitfield has collaborated with the violinist Miri Ben-Ari and worked on a progressive acid-jazz concept (other record on Transparent label), and moreover- has assembled the tough, hard-swinging band that is present for this recording.

The band features fellow New Orleans native Donald Edwards on the kit, young and highly competent Brandon Owens on bass, and also- young but rather prodigious pianist- Robert Glasper. Glasper hails from Houston, has worked with Russell Malone and the Cannonball legacy band, and is presently studying with Bill Charlap. This is his first time on record and it is definitely an auspicious start.

That much said, Whitfield's band is a band-concept that transcends the contributions of any single soloist. Whitfield's solos' stand out, as do Mr. Glasper's, but it is apparent that what is most crucial to the workings of this band are the highly rhythm-oriented arrangements. This is nowhere more clear than on the opening track "Ducktones", a piece that is set off by a guitar-piano riff and then into a very "up" groove that is defined by Donald Edwards quick and efficient bluster throughout. It is staggered by an intermittent vamp played alternately by the piano or the bass. It's a very strong piece, and Whitfield lives up to the "Quick Pick" fame like never before here. Glasper also delivers a ripping solo that Kenny K, God of post-bop pianists who "rip" would surely smile down upon. Edwards drums undoubtedly serve as pointed catalyst for these solos.

On both that first track and the second Whitfield employs a tube-amplifier that makes for a vaguely fusion-y sound at the same time is a unique voice for his concept. It by no means dominates the overall sound of the band but is definitely not what you might be expecting from Whitfield.

The second piece, "A Beautiful Intuition", is deceptive in its intensity. As a medium tempo ballad voiced in octaves by Whitfield and underlaid by fleety piano fills, it stays on even keel right until the last 5 minutes, at which point it goes into a Trane-like chanting that is egged on by Elvin-like snare roll bombast. Whitfield and Edwards, indeed, sound as if they were in the kind of zone that Trane and Elvin could often be.

Unfortunately, depending on how one looks at it, the fresh concept that is laid out in the opening tracks gives way to a more comfortably straight-ahead sound. There are two tracks featuring Whitfield in a trio setting, in which he totally smokes but doesn't seem challenged, and a reading of one of Whitfield's repertoire of tunes, "A Brooklyn Love" that reprises the quartet with Glasper. Although it is not as clearly conceptual, this is nonetheless an excellent track, and thus befitting such a wonderful ballad by Whitfield that can really do no wrong. "A Brooklyn Love" was also featured on his Seventh Avenue Stroll record, but here is played at a slower, simmering pace and with an achy, impassioned strain by Whitfield that is very affecting. Glasper follows with a gut-level blues statement that reveals a similar intensity for the piece. Again, like on "Beautiful Intuition", the comfortable pace deceives and there is a build up-to boil eruption of riff and bluster to close it out.

Finally, this is not only an intriguing concept recording but a great live record of the sort that makes you feel often as if you are actually there. In short, it is highly engrossing. Mark Whitfield is a tremendous chops-oriented player who weaves spells with any given solo and he obviously has chosen to chart a more progressive trek for his music with the kind of music here. As for "Raw": it is both accurate and a misnomer. The recording quality may be deemed "raw" by an audiophile who prefers live records to not sound really "live" and the band may also be called "raw", but only if one wishes to apply that qualification to its intensity.