Temperamental Trio: Raw and the Cooked

By EYAL HAREUVENI
September 30, 2006
Sign in to view read count 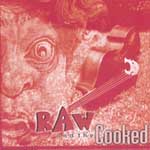 The Temperamental Trio is a unique outfit on the Israeli jazz scene (all three players are part of the Jerusalem Kadima Collective), and not just because of its members' rich and international background. American-born baritone player Stephen Horenstein is associated with sound innovator Bill Dixon and is one of the most valued musical educators in Israel. Bass and electronics player Jean Claude Jones began his musical career in France and the US, before moving to Jerusalem. French science researcher and laptop player Loic Kessous, who resides now in Israel, is a constant feature in many alternative musical happenings.

The working process sets apart this trio. Weekly spontaneous free improv meetings among all three players were documented, than manipulated by Kessous on his laptop and later edited into short pieces by Jones and Horenstein. This time-consuming process did not affect the fervent vitality and subversive tone of the Temperamental Trio's debut, Raw and the Cooked. The trio succeeds in creating a shared textural language and extending the sonic capabilities of instruments like the baritone sax and the bass.

The Temperamental Trio expands current experiments in the latest forms of electroacoustic improvisation, as documented by labels like Erstwhile Records and For 4 Ears (and I doubt if the members of this trio are aware of these sonic experiments), still keeping an organic flow in the music. All of the seventeen tracks—only two are over four minutes long—focus on a single theme or a line, allowing the process of manipulation to expose its many facets.

Horenstein, who unfortunately rarely records, presents his rich and imaginative vocabulary on the baritone, from dry drone sounds through windy flute-like whistles and angry shouts to Middle-Eastern percussive sounds. Jones enjoys such improvised chaos and instigates the trio to explore extremes with extended bass techniques and effects. Kessous adds surprising, alien soundscape manipulations that push the musical envelope of this trio further.

Sometimes the sophisticated process and hi-tech instruments result in sounds—as on "Slow Day"—that were already investigated by such vintage electronic outfits as the early Tangerine Dream, and sometimes Horenstein's shrieks and growls—as on "Mucho 2"—sound like they're referencing some of the most introspective moments of another sound explorer, Swedish reed player Mats Gustafsson. But on most of the tracks, the Temperamental Trio follows its own adventurous course, invented by three daring and restless souls who manage to transform their sonic collisions into a bold statement of creativity.