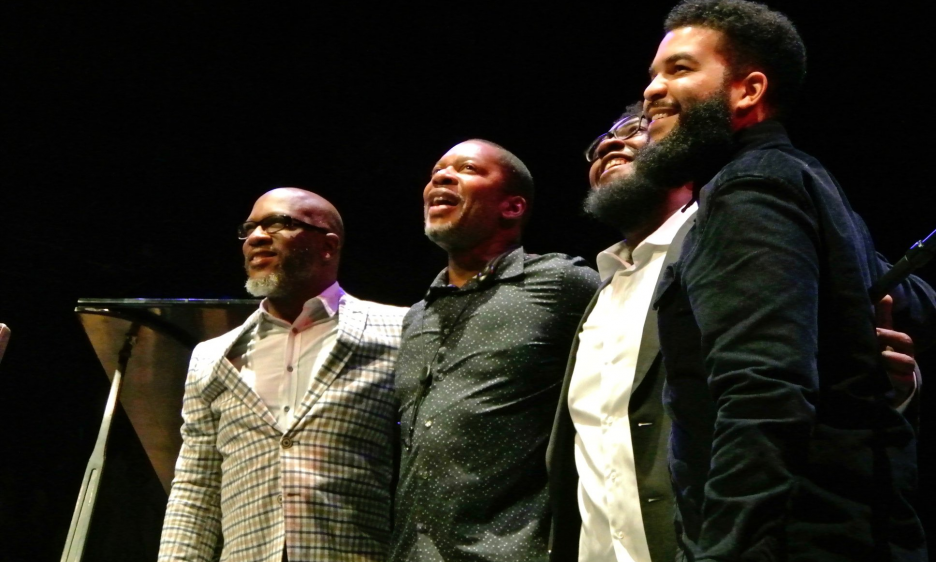 Since 2007, the Kente Arts Alliance (KAA) has worked diligently to underscore the relationship between the arts and community by providing accessible cultural programming within the city of Pittsburgh. KAA has hosted a number of elder jazz statesmen, including Hugh Masakela, Billy Harper, and Geri Allen, and next-generation voices such as James Carter, Antonio Hart, and Charenee Wade. Mensah Wali, a member of Kente's Board of Directors and founder of the International African Arts Festival, took to the stage at the historic New Hazlett Theater to introduce the quartet.

"We don't realize we're in history," Wali prefaced. "20 years from now, you'll look back and say, 'I was there.' Some of us can look back 50 years and say, 'I was there.'" (As a close educational affiliate with The East in the early 1970s, which hosted Rahsaan Roland Kirk, Pharoah Sanders, and Betty Carter to name a few, Mr. Wali is something of an authority on the subject of looking back on cultural history.)

Pianist Orrin Evans, bassist Dezron Douglas, and drummer Kush Abadey surrounded Coltrane, who quietly approached the stage with his tenor cradled against his chest. The members of this imposing quartet have collaborated on several projects in various configurations over the past decade but each individual remains so strong in his own voice that each performance reaches uncharted territory.

Coltrane opened the concert with "Cobbs Hill" from Ralph Alessi's 2011 release Wiry Strong (Clean Feed Records), which featured Coltrane, Andy Milne, Mark Ferber, and Drew Gress. Evans and Douglas constructed a meditative soundscape with Abadey's occasional sober punctuation with his cymbals. The rhythm section escalated the tension as Coltrane stood patiently in the eye of sound hurricane. The saxophonist, an altruistic player by all counts, hit the release valve when he entered the storm, dipping and leaning with each line. His firm dynamic grasp created the illusion of multiple saxophonists playing in unison.

For the quartet's rendition of Charlie Parker's "Segment," Coltrane traded his tenor for his sopranino. He introduced the tune alongside Douglas who is, in every way that matters, the quintessential bassist. Douglas, a protégé of late altoist Jackie McLean, trained his characteristic canon-like tone on the heart of the matter throughout the concert. His straightforward performance and keen ears enriched every aspect of the group's interplay. Abadey provided periodic shocks to the water, pushing and challenging the musicians around him. The creative drummer weaved between time feels, infusing selections like "Giant Steps" and "Lush Life" with dangerous energy.

Coltrane returned to the tenor for "For Turyia," a tune composed by Charlie Haden for his friend and collaborator Alice Coltrane. Abadey delivered a gentle performance with brushes and mallets as Evans constructed lines with his right hand that were worthy of ear service in the world's most illustrious symphony halls. The saxophonist continued his celebration of his parents with "Jagadishwar" from Alice Coltrane's final Impulse record Translinear Light (2004) and John Coltrane's "Giant Steps."

Recalled for an encore, the quartet capped the evening off with a moving performance of Billy Strayhorn's "Lush Life." The gesture was not lost upon Coltrane's audience—Strayhorn, a graduate of Westinghouse High School, occupies a special place in the hearts of Pittsburghers.

Beyond his technical skill and creative interpretations, perhaps Ravi Coltrane's most commendable attribute is his ability to treat all musics with great care. When synthesized with the saxophonist's spiritual awareness, old tunes are reborn and new soundscapes are breached. Coltrane is often saddled with decades' worth of legacy, but it is a weight he carries with grace and patience. Coltrane bares this load across his back as he moves deftly along his own footpath, one that audiences will look back upon in twenty years and collectively say, "I was there."