By EYAL HAREUVENI
June 7, 2014
Sign in to view read count 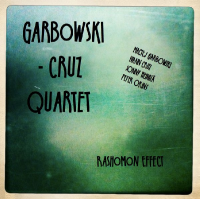 This pan-European quartet was formed after French guitarist Ivann Cruz and Polish double bassist Maciej Garbowski, a frequent collaborator of saxophonist Maciej Obara and Norwegian guitarist Terje Rypdal, met in 2010 in the JazzPlaysEurope project. The two decided to continue working together. They surrounded themselves with Cruz partners in the Lille- based musicians Muzzix collective, drummer Peter Orins (known for the Kaze quartet with Japanese pianist Satoko Fujii and trumpeter Natsuki Tamura) and Finnish reed player Kari Sonny Heinilä (member of the UMO Jazz Orchestra since 1987 and founder of chamber music ensemble Alberto).

Cruz and Garboswski decided to compose the music for the quartet's debut recording together and in two steps. First, in the manner of correspondence, Garbowski wrote the pieces tiled "parts" and Cruz the pieces named as "traps." Second, the whole quartet played games of distorted quotes and personal interpretations of the basic compositional ideas or deconstructions of these ideas: hence the album title Rashomon Effect. This approach with the distinct personalities of the musicians expanded the vocabulary of the quartet beyond modern jazz and embraced elements of jazz, contemporary music and influences from traditional folk legacies.

The first piece that stresses a patient, supportive and respectful interplay may mislead a casual listener that this is another quartet that sticks to the ECM school of lyrical, melancholic Nordic-Baltic atmosphere. But already on the 10-minutes "Trap I" all are determined to clarify that the quartet opts for intense, powerful and dissonant excursions. Cruz takes the lead with a fantastic solo that covers the sonic spectrum between Jimi Hendrix and Rypdal, Heinilä answers with a commanding solo on the tenor sax, and both enjoy the driving rhythm section of Garbowski and Orins. Even on the gentle, slower pieces the Quartet maintains a playful element of risk-taking that charges its interplay with immediacy, humour and surprise. Moreover, the quartet succeeds in balancing between the composed segments and spontaneous improvisations, as well as between the warm, thoughtful sound of Heinilä to the atmospheric flight and jagged attacks of Cruz, the deep-toned colors of Garbowski and his powerful time-keeping and the sonic searches and fractured pulse of Orins.

Promising quartet that has just begun to explore its great potential.