Proceeds go towards ensuring that Madonna never makes another movie.

The Los Angeles Museum of Films One Watches In Order to Make Themselves Feel Intellectually Superior (or LAMFO, to its friends) will be unveiling a series of long-forgotten jazz-related films sure to please both jazz snobs and film snobs, if such a thing is possible. The Swing Forward, Fall Back Series follows in the tradition of such recent successes as Lost Clambake: David Lynch Reimagines the Films of Elvis Presley and the marathon four-day retrospective LoveLeigh: The Nude Scenes of Jennifer Jason Leigh. From October 24th through the 31st, four films long thought to be lost will once again see the silver screen. Each print has been completely restored, digitally remastered, restored again, then reverted back to crumbling nitrate film stock just for the jolly hell of it.

First up in the series is the Shaw Brothers chop-socky attempt to cash in on the early seventies Fusion scene with Twelve Keys of Shaolin (1973), starring John McLaughlin as guitar-wielding monk Pik Long. Seeking vengeance against the gang who kicked his brother in the face repeatedly for the first eight minutes of the film, Long must first redeem the honor of a blind seamstress (Joni Mitchell) and stage a benefit concert to save his father's noodle stand. You'll cheer the final scene (for more reasons than one), where he dispatches of the gang's leader with a withering Gm13th chord. Also starring Jack DeJohnette as Chik Boom and Gary Peacock as Lo Don.

Next up is a recently discovered film starring Louis Armstrong. It has long been thought that 1931's Ex-Flame was Pop's film debut, but this 1929 proto-talkie languished for decades in a film can believed to contain a pornographic movie starring Marie Dressler that no one in their right mind wanted to see until discovered by a chubby-chaser at AFI. Made by the pioneering black-owned Lincoln Motion Picture Company, and intended as an answer to Al Jolson's The Jazz Singer, The Real Jazz Singer languished in obscurity mostly because of the threat of copyright infringement lawsuits. Pops essentially plays himself, as a happy-go-lucky musician from the South who comes to the big city to seek his fortune. Features a cameo by Sidney Bechet as a clarinet-playing dry cleaner who encourages Louis to pursue his dreams, and later helps him deliver a slapstick ass-whipping to a white guy in blackface who wouldn't know jazz if it bit him on the tuchus. 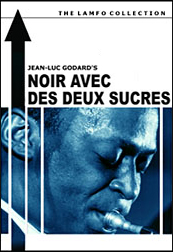 Beach Blanket BeBop (1959) stars Dizzy Gillespie as an affable beach bum in Hawaii who wants nothing more out of life than to surf and play jazz. When a greedy developer wants to turn Diz's favorite stretch of beach into a themed resort, Diz must rally both his fellow surf bums (Greg Noll, Buzzy Trent) and jazz musicians (Stan Getz, Max Roach) to convince a local pineapple baron (surf legend Duke Kahanamoku) to purchase the property and set it aside as a jazz/surf club. Don't miss Diz and Stan playing "It Don't Mean a Thing (If It Ain't Got That Swing)" while riding on the back of Greg Noll's longboard.

French New Wave filmmaker Jean-Luc Godard's stark black-and-white treatment of Miles Davis as a disaffected American expatriate trying to get a regular cup of coffee in Paris, Noir Avec des Deux Sucres (1964) should have been a masterpiece. Instead, a nervous studio heavily edited the film to tone down Davis' edgy performance and the perceived slight of French coffeemaking art. The result was an absolute mess, worse than the legendary hack job done on Orson Welles' A Touch of Evil. After years of painstaking restoration the film is about 85% of the original version, the only notable loss being a scene depicting Davis' smoldering rage after being served yet another "goddamn bowl of milk with a little coffee in it" (cafe au lait) that was said to rival Brando at his peak.

Admission will be $6.50 for each film, and will require a background check of your Netflix or GreenCine queue. Proceeds go towards ensuring that Madonna never makes another movie. LAMFO is located next to where that really cool vintage boot store used to be, down the street from the little place that makes these wonderful Chinese dumplings but there's never any place to park.