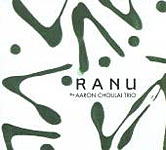 It is almost as if just because he does not see like most folks that Papua, New Guinea-born pianist, Aaron Choulai has a heightened sense of hearing, which is so unlike anyone else's sense of hearing. All sound, to Choulai appears to resemble a sort of patchwork quilt with random, vividly colored aural swatches and swathes, at once dissonant and symmetrical, seemingly disparate textures colliding and creating new structures as his fingers touch and feel the white hot and ebony cool of the keyboard. Chords are unleashed by an unseeing eye that yet sees, hears and feels the very heart of the music. This is what blows the mind away on Choulai's Ranu, and all it takes is a few bars of "Bedria," a stellar, melancholic composition with notes and phrases barely above a whisper.

Neil Young "Tell Me Why" is almost unrecognizable, as Choulai turns it into an instrumental all his own, a song of pastoral, epic proportions. Pacing himself like Jacky Terrasson sometimes does, with superlative dynamics Choulai stutters and glides through the melody of the song as he, bassist Sam Anning and drummer, Rory McDugall poke around to reveal an elastic harmony until, somewhere around the song's seventh minute mark, it climaxes into a swirling typhoon before the pianist releases the melodic tension. Then the song flutters down, bereft of the energy that exploded into the magnificent crescendo.

The pianist also constantly needles his cohorts. It's almost as if he wants to provoke them just before they solo, so that their energy surges through a musical gauntlet that the pianist has created for them. On "White Scarf," with an irregularly swinging motif, Choulai appears to be teasing the bassist constantly. Anning then responds by dancing interminably through the rest of the song's bell-like melody. This time, alternate drummer Ben Vanderwal is drawn into the argument. The percussionist responds with wonderfully accented interplay, flowing with rhythmic glissandos from cymbal splashes and rolls on taut skins, and then suddenly breaks into staccato rat-a-tat linearity.

"Ranu" features a mad, circular motif that turns irregular and labyrinthine as Choulai orchestrates the changes chattering constantly with McDugall, who pulses his solo beautifully while Choulai comps incessantly until the song's denouement. Thom Yorke's "The Tourist" is given a glassy skittering melodic surface encasing a rich harmonic underbelly. Choulai plays notes so late behind the rhythm that the language of the melody appears almost indecisive in the top half of the song. Then suddenly, with a subtle cue from the piano and bass, the music surges wildly to the end.

There is more extraordinary music—a whispering ballad, in the form of "Dreams Of Paper Roses," and the standard, "You Go To My Head," that brings the exciting set to a close. "Encore...encore..." is the thought, as the final notes echo and spin, drifting uncontrollably into the space with the heart.

You Go To My Head; Bedria; Deep Mountain Gone; Tell Me Why; White Scarf; Ranu; The Tourist; Dreams Of Paper Roses; Yotsuya; I'll Be Seeing You.