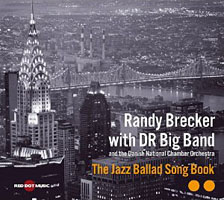 On The Jazz Ballad Song Book, trumpeter Randy Brecker, the Danish Radio Big Band and Danish National Chamber Orchestra approach the slow, wistful side of this repertoire as one dimension among others. They expand their view outside of standards to include film works, lesser-known tunes and original compositions.

As featured soloist, Brecker displays the colossal tone, impeccable chops and searching impulses that have gifted bands from those led by pianist Horace Silver to singer Bruce Springsteen. His drive makes "All Or Nothing At All" a demand rather than a lament. He stretches out harmonically on his own tunes, with a funky bridge on "Foregone Conclusion" and a spacious theme for "I Talk To The Trees." More traditional ballad settings on "Cry Me A River" and "Skylark" showcase tenderness without sentimentality especially on "Skylark," where Brecker recasts the melody in disillusioned long tones.

Brecker stays extroverted, even as the intimacy of trumpeter Miles Davis' 1961 Columbia recording looms over "Someday My Prince Will Come" (down to Wynton Kelly's piano solo, orchestrated for strings and woodwinds). After a clear melody statement, Brecker opens up with packed runs and dejected crushes of dissonance. Per Gade's milky guitar is an effective foil, taking as much pleasure dipping into the lower register as it does sailing into higher, Wes Montgomery-inspired territory. Jesper Riis' arrangement also explores contrasts between bitter undertones in the strings and some Nelson Riddle-style shouting from the band.

Textured charts surround the trumpet heavyweight, flawlessly interpreted by the Danish groups and rarely settling into predictable accompaniment. Several soloists from the DR Big Band also get their own impressive say. Icy violins, biting sax counterpoint and a hard-edged swing on trombonist Peter Jensen's setting of "All Or Nothing At All" torch any sentimental associations of the tune. Pelle Fridell's baritone sax is heard in both half-time and double-time passages, along with allusions to modernist composers during an ominous deconstruction in triple meter. Occasionally some arrangements rely upon cliché, for example the syrupy, vibrato-laden violins of "The Immigrant/Godfather" or the rhythmic but otherwise generic introduction to "Goldfinger," where John Barry's theme proves better suited for screen heroics than studio improvisation.

Yet these moments are few and far between original touches such as a chirpy piccolo leading the elephantine ensemble on "The Immigrant/Godfather," the sleek surfaces of "I Talk To The Trees" or trombonist Vincent Nilsson's arrangement of the little heard but affecting "This Is All I Ask." Following Henrik Gunde's piano, two tightly muted trumpets weave around Brecker's open horn, with dark tuba and tapping triangle underneath. The effect is uncluttered, silken but strong, and builds beautiful tension, before the release of lush strings. When Brecker steps back from double-time for a few halting notes, the effect is similarly arresting. Peter Fuglsang's smooth alto sax dueting with Brecker makes an ideal coda.

Thelonious Monk's beloved "Round Midnight" is a fitting end to any collection of ballads. Here it sports the slowest tempo on the disc, as well as the catchiest swing. The massive, transparent ensemble and Brecker's subtle yet dynamic reimagining also sum up this album's strengths (even if the superfluous Latin feel also points to its occasional excesses). The Jazz Ballad Song Book strikes a satisfying balance between re-imagined standards, tasteful explorations and straightforward big band brawn.


Tracks: All Or Nothing At All; Cry Me a River; Someday My Prince Will Come; Foregone Conclusion; Goldfinger; Skylark; I Talk To The Trees; This Is All I Ask; The Immigrant/Godfather; Round Midnight.

All or Nothing At All; Cry Me a River; Someday My Prince Will Come; Foregone Conclusion; Goldfinger; Skylark; I Talk To the Trees; This is All I Ask; The Immigrant/Godfather; Round Midnight.